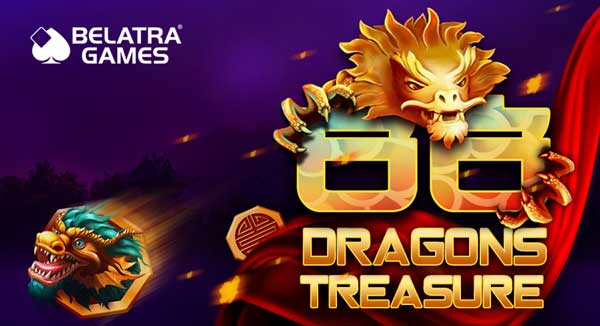 Belatra’s slot is set against a rich tapestry of Eastern-inspired themes being closely watched over by a fire-breathing dragon. An oriental soundscape creates an atmospheric experience as players hunt for luxurious symbols and golden artifacts while navigating through a dragon’s cave.

Within the main game players can spend credits to enhance the number of golden symbols in play. Free Games are initiated once three dragon Scatter symbols swoop onto the reels and an extra 10 spins are awarded every time a triple Scatter combination appears until spins run out or they reach 300. The bet total from the base game stays the same and just the top paying symbols count.

There are Wilds and Wilds with firecrackers and if the latter is found then the dragon gobbles them up until full, at which point the bonus coin game begins. Match three of the same coloured crystals to land a precious prize – the colours correspond to the bonus size – Mini, Minor, Major and Grand.
Belatra’s Risk game is available for players wishing to maximise their returns. They must pick one overturned card from four which doubles your total if higher than the dealer’s open card. Should you correctly pick Red, Black or Suit then the total is quadrupled.
Sergey Chernyavski, Belatra Games’ Deputy Director, Sales & Marketing, said: “88 Dragons Treasure is sure to fire up players’ passions as it delivers a legendary slots experience that’s shimmering with ways to win.”