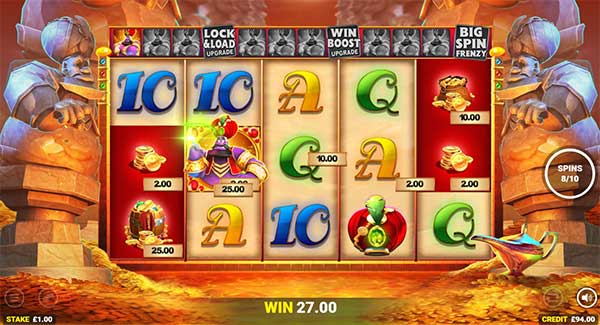 One of Blueprint’s most successful and popular game franchises ever, the latest Genie Jackpots challenges players to gain entry to the loot-filled Cave of Wonder where the free spins of the game’s title offer riches of up to 50,000x the bet.

Collecting four Genie symbols during the bonus round activates the Lock & Load feature, which adds 10 free spins and triggers a re-spin for every subsequent Genie landed. The more Genies accrued, the more levels the player ascends with eight awarding 10 spins and Win Boost, which increases the value of each symbol that led to the win.

Hitting 12 of the regally-robed purple hero bestows the Big Spin Frenzy. Here, all previous features are activated and the amount from the winning spin is awarded five times in a row.

Genie Jackpots Big Spin Frenzy follows the hugely successful Wishmaker iteration in one of the most recognisable non-branded franchises in the slots industry.

Jo Purvis, Director of Key Accounts and Marketing at Blueprint Gaming, said: “The Genie has returned and he’s bigger and feeling more generous than ever. His home in the loot-filled Cave of Wonder is the perfect place for any player new or old to treasure hunt in the Arabian sands.

“While the character is back along with his familiar symbols, the Free Spins round has seen a rub of our developer’s lamp as have the visuals. The improved graphics are befitting of a modern slot but maintain the core characteristics of the original that proved so popular with players.”