FunFair Technologies rocks the boat with Bounty on The High Seas 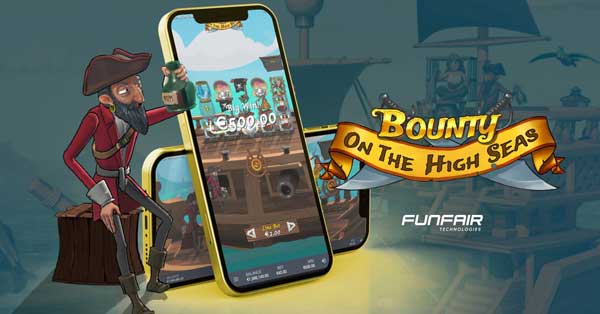 FunFair Technologies has announced the launch of its thrilling new maritime slot title, Bounty on The High Seas.

The multiplayer games developer’s 5×3, 20 fixed lines release invites players to set sail on an epic pirate adventure featuring explosive TNT barrels triggering a Cascade Streak that brings hearty wins of up to x2,453 for those who avoid the dreaded Davy Jones’ Locker.

Buccaneering bettors in pursuit of buried treasure can enjoy three high-paying and five mid-low paying symbols along with a Wild Clamshell that could appear on any reel, creating a myriad of opportunities to plunder the loot of the high seas.

Bounty on the High Seas follows an array of exciting launches unveiled by the multiplayer games studio, which is dedicated to delivering social, active and simple entertainment options to the emerging generation of gamers.

Lloyd Purser, COO of FunFair Technologies, said: “With the success of our previous two releases Shamrock Treasures and CyberHunter, we are pleased to announce the launch of Bounty on the High Seas.”
“Bringing our most successful blockchain games to operators has been rewarding work this year, and I can’t wait to see what players make of our latest immersive release.”

“Since launching, we’ve helped to introduce multiplayer gaming to the casino community with a groundbreaking combination of new features and classic mechanics, and I can’t wait to see what players make of our latest immersive release.”