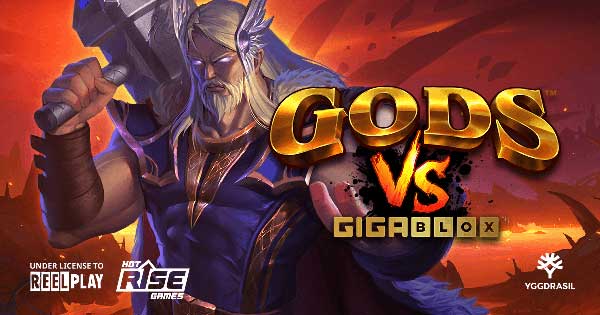 Yggdrasil and ReelPlay partners Hot Rise Games have combined once again to deliver a slot of gargantuan proportions in Hot Rise’s Gods VS GigaBlox™.

Whenever five or more scatter symbols land anywhere on the reels eight Free Spins are awarded. The God symbol that featured most during the bonus-triggering spin will become the dominant God, meaning that it will appear as a Wild and is shown as a golden symbol.

When six VERSUS letters land the VERSUS feature is triggered, and this sees players awarded with six Free Spins. A Champion and a Challenger are randomly selected from the God symbols and every Champion and Challenger symbol that lands is collected. As more are collected improvements are implemented, which include additional spins, symbol multipliers, Wilds, Wild multipliers and cash prizes.

In certain jurisdictions, players can purchase the VERSUS feature via the buy feature for 100x their stake.

Gods VS GigaBlox is the latest Hot Rise Games title to be produced as part of the YG Masters portfolio, following Monsters VS GigaBlox. As with all YG Masters titles, the game is powered by GATI, Yggdrasil’s state-of-the-art technology enabling partners to employ the preconfigured, regulation-ready, standardised development toolkit to consistently produce cutting-edge content followed by rapid distribution.

Stuart McCarthy, Head of Product & Programs at Yggdrasil, said: “We were blown away with the reception to Monsters VS GigaBlox not too long ago and it only felt natural to return to the series with a bigger and bolder game, Gods VS GigaBlox.

“We fully expect this release to emulate the success of its predecessor thanks to its wonderful features and lucrative GigaBlox GEM we know players adore.”

David Johnson, CEO at ReelPlay, said: “It’s incredibly rewarding for ReelPlay to enable independent studios like Hot Rise Games to release top slots such as Gods VS GigaBlox. With an infinitely re-playable bonus game, Gods VS GigaBlox is the fruit of a winning collaboration combining Hot Rise design, ReelPlay technology and delivered to market under the YG Masters framework by Yggdrasil.”