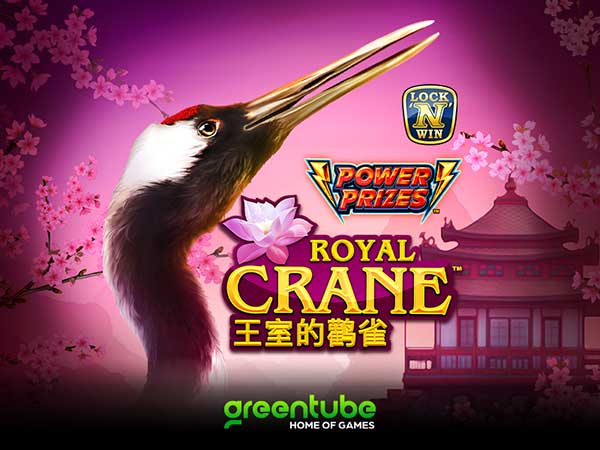 Greentube, the NOVOMATIC Interactive division, is inviting players on a journey through the heart of Asia in its latest majestic title Power Prizes™ – Royal Crane™.

Filled with beautifully crafted Asian-inspired symbols and characters, this game transports players to a serene pond surrounded by cherry blossom and lotus flowers.

In this thrilling feature-rich slot, landing six coins across the five reels triggers the Power Prizes™ bonus feature that gives players the chance to claim the Grand Jackpot with a bit of luck. The number of bonus spins awarded in the Power Prizes™ feature is dependent on the number of triggering coins. The feature will lock down all the collected coin symbols and will check for any new coin symbols appearing during the feature.

Three or more scattered Lotus symbols trigger the free spins feature where up to 24 spins can be awarded and even bigger wins are possible because all royal symbols (A, K, Q, J, T) are removed.

The famous Red Envelope scattered on the third reel will trigger an exciting feature that sees up to four additional coin symbols added to existing symbols’ positions.

Markus Antl, Head of Sales and Key Account Management at Greentube, said: “We continue to enhance our portfolio with immersive and engaging titles and with its popular Asian-inspired theme, five jackpots and thrilling features, Power Prizes™ – Royal Crane™ is set to be a hit with players around the globe.

“As players chase for coins to claim the big wins they will not be disappointed by the beautiful scenery and accompanying soundtrack in this slot that takes the gaming experience to a new level.”