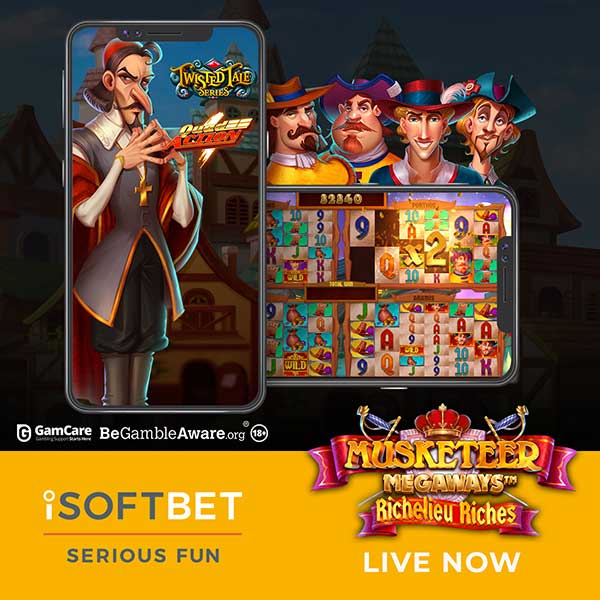 iSoftBet, the leading online games supplier and content aggregator, makes a return to the renowned Twisted Tale series with the launch of its brand-new slot, Musketeer Megaways™.

Arriving in new Quad Action™ format for the very first time, Musketeer Megaways™ gives players the choice to play the single reel game alongside Cardinal Richelieu or join d’Artagnan and the Three Musketeers on an epic four-reel extravaganza with a unique Free Spins bonus round!

The single game, 1ForAll, is a classic Megaways offering with up to 117,649 ways to win and cascading symbols for every win. Four or more Bonus symbols triggers Free Spins, which take place across 4 new reel sets, each with its own increasing win multiplier. 1ForAll also has two random in-game modifiers: Lose To Win, which will turn a losing spin into a win, and Max Megaways.

The 4-window game, All4One, brings the added excitement of 4 Megaways games at once, with up to 117,649 ways on each reel set and cascading symbols for every win. Four or more Bonus symbols on any reel set will trigger Free Spins, which also take place across all 4 reel sets, with individual increasing multipliers. However, there is also a special Super Symbol which can land on any reel set during All4One Free Spins – when this Super Symbol lands, all the win multipliers are boosted to the highest one available, sending the bonus round into overdrive, often with epic results.

Musketeer Megaways™ becomes the latest product to be designed by iSoftBet, following in the footsteps of recently released Golden Jokers Double Up™, as the provider continues to carve out a reputation for creating titles that envisage the brand’s personality.

Mark Claxton, Head of Games at iSoftBet, said: “Musketeer Megaways™ is the perfect title on which to re-launch the Twisted Tale series, incorporating our new Quad Action™ mechanics and bringing lucrative bonus features and a playful theme together in a truly immersive experience.

“The new release draws inspiration from the incredible adventures of the Three Musketeers and gives players more control than ever before over their experience, with multiple formats on offer to suit their playing preferences.”