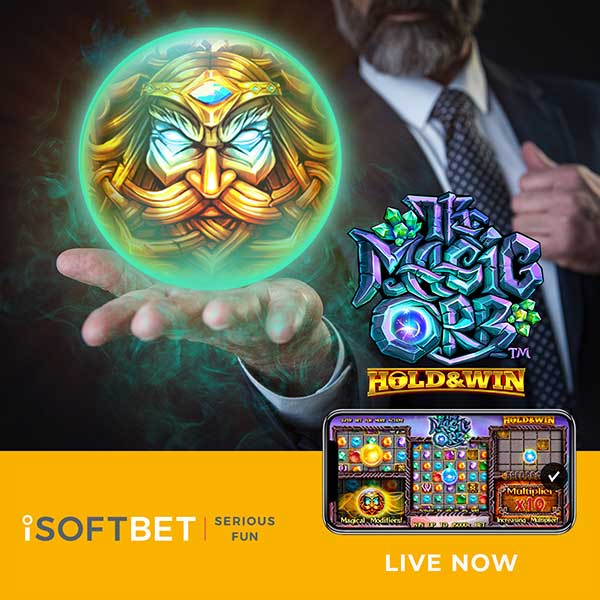 iSoftBet, the leading online games supplier and content aggregator, invites players to try their luck and harness the power of mysterious gems in new release, The Magic Orb.

This 7×7, cluster-paying game features a host of exciting rewards waiting to be discovered, with a magical Orb placed in the centre of the grid ready to fire up on any spin, rewarding players with one of the four random mini modifiers or triggering one of the two bonus rounds.

The various modifiers that the Orb can trigger are: Transform, which changes one symbol type into another; Wild, which adds extra random Wilds to the layout; Multiplier, which boosts all wins on that spin; and Destruction, which shatters all but one type of pay symbol.

Payouts are formed by landing five or more matching symbols in a single cluster, with gold-backed gems being the most valuable of all, awarding impressive multipliers worth 500x the bet when 15 or more of the top-paying purple ones land in a winning combination.

The Hold & Win Respins bonus can be triggered by the Magic Orb, or by landing five or more Scatter symbols anywhere in view. Each time this is triggered, three initial respins are awarded, which will reset to three every time a new symbol lands.

During the Hold & Win feature, at least one of the Pot Prizes, worth 25x, 50x or 100x, is guaranteed to be triggered, while filling the entire grid will award the Mega Pot prize worth 250x the bet.

The Free Drops feature can be won by landing 3 Bonus Scatter symbols anywhere in view or as one of the orb awards. During Free Drops an unlimited multiplier is in play and will increase by x1 for every cascading drop, while the orb can also deliver one of the modifiers during the bonus round.

Mark Claxton, Head of Games at iSoftBet, said: “Following on from the glitz and glamour of our previous releases, The Magic Orb is a shining example of the innovative experiences that we at iSoftBet are known to produce.

“We are always searching for new ways to bring added value to our portfolio in order to fully engage our players, and by utilising an assortment of popular mechanics and features in this game, we feel we have definitely achieved that goal.”