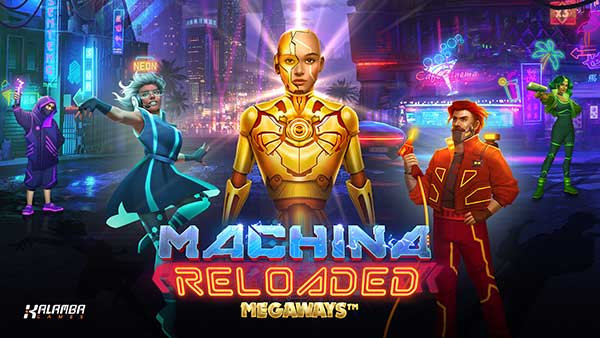 Kalamba Games returns to an android-filled future in a sequel to its original sci-fi favourite, with Machina Reloaded Megaways™.

This six-reeled slot has symbols depicting various cyborgs that must form matching combinations across ever-changing reels to unlock a win. Players are aided in creating these winning combinations by a Machina Reloaded Megaways™ wild symbol which substitutes all symbols in game except the Scatter.

Four levels of Cashpots award big wins and can be triggered whenever 10 or more cyborgs are landed during any spin.

The steps on this ladder transform low-paying character symbols into the highest paying and award an additional two spins. These transformed symbols then act as Cashpots creating a crescendo of excitement for players with more high-paying Cashpots in play as they unlock extra spins.

The Buy Bonus HyperBonus feature can be bought in order to instantly unlock the bonus round with multiple different starting spin options available. Players can also fine-tune their gaming experience with two levels of HyperBet available, altering the cost of spins and the number of max Megaways™ present.

Alex Cohen, COO and Co-Founder of Kalamba Games said: “Integrating the Megaways™ mechanic into a popular sequel is sure to be a draw for both new and existing Kalamba Games enthusiasts.

“The title boasts innovative mechanics and encourages direct player interaction through its HyperBet feature allowing for individual styles of play. Big win opportunities then abound through the Cashpot mechanic. The highly stylised visuals on offer and Machina Reloaded Megaways™ huge max win of 37,000x are set to be another cyberpunk sensation with players!”