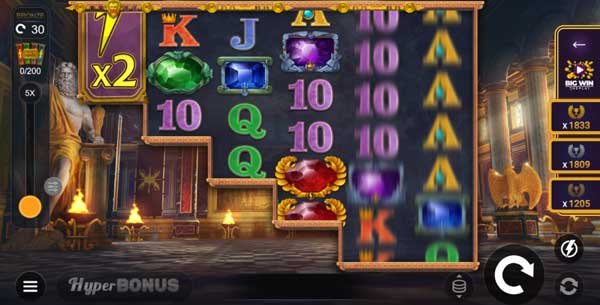 Innovative slot supplier Kalamba Games has released its latest hit Jewels of Jupiter, a feature-packed title set in the opulence of ancient Rome.

The lavishly designed ode to one of history’s most fascinating periods plays out against a backdrop of classical, grand Roman statues and glittering gold while the unique, descending reel layout offers win potential of over 2,800x the bet.

The game re-introduces the classic and much-loved missions mechanic, with four levels of saveable assignments for players to explore and enjoy, from Bronze to Platinum, ramping up engagement to new levels.
Full-column Multiplier Wilds appear on every spin while the reels reverse during the Free Spins Game for even greater potential wins and Kalamba’s signature HyperBonus feature returns, enabling players to shortcut into the bonus round.

Jewels of Jupiter is a sumptuous addition to Kalamba’s growing slot portfolio of over 50 titles, which is set to captivate modern players with its dazzling ancient promise.

Alex Cohen, COO and Co-Founder of Kalamba Games said: “Jewels of Jupiter offers medium volatility and an array of features such as the saveable missions which allows players to pick up where they left off, significantly boosting engagement levels.

“Coupled with a proven theme full of beautifully designed surroundings and symbols, this title is a perfect addition to our offering which is gaining fans around the globe.”