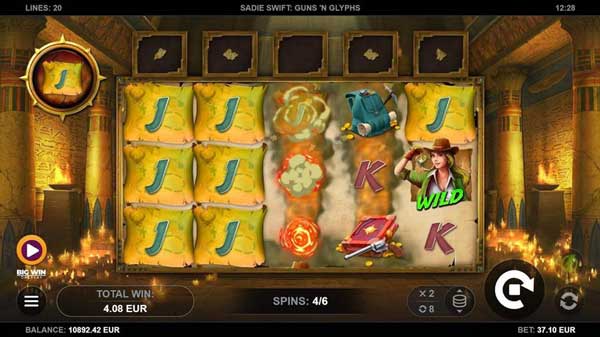 The thrilling title is the result of the industry’s first Twitch streaming competition that Kalamba and Wildz Casino held earlier this year, with the winner invited to collaborate with the game studio to create a slot title. CasinoTest24 was the lucky streamer claiming first place and has played a major part in developing the game.

The game combines an Egyptian and a Wild West theme and is packed with features including Win Multipliers and Bonuses, as well as two unique Free Spins mechanics for each world.

The 5×3 slot also comes with Kalamba’s signature features HyperBonus that allows players to shortcut to bonus rounds, and HyperBet which enables players to customise the volatility profile of the game.

The new release is exclusively distributed on the ORYX Gaming platform.

Alex Cohen, COO and co-founder of Kalamba Games, said: “We were thrilled to announce this industry-first venture earlier this year and are very pleased with the result of our collaboration.

“Working with Casino24 has been enlightening and by getting a player’s perspective on everything from the theme to the gameplay and mechanics, we have created a slot that is sure to appeal to a broad customer base. Combining our most popular mechanics, HyperBet and HyperBonus, with two player-favourite themes, Sadie Swift: Guns ‘n Glyphs offers two epic adventures in one.”

Hauke from CasinoTest24 said: “The selection of slots available nowadays is so big that it’s hard to stay competitive and you need something really good to keep the players playing. Sadie Swift: Guns ‘n Glyphs is certainly not a clone and definitely brings something fresh for players.”