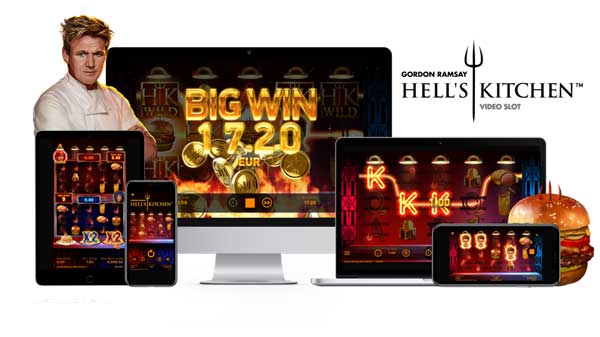 Ramsay has operated successful restaurants across the globe, accumulating 16 Michelin stars. He has transcended the culinary world to become a household name in the UK and internationally through numerous shows, including Hell’s Kitchen™, the reality TV programme on which the 5-reel, 3-row video slot is based.

The hit show continues to captivate audiences across the globe, with a recently announced season 20 coming later this year in the US on FOX. The video slot is sure to whet the appetite of fans as it perfectly serves up the emotionally-charged atmosphere of the series, with flying knives, pots and plates in the Ramsay’s Wilds feature that randomly puts up to seven Wild symbols on the reels in the main game.

Players pick a side, and if their team wins, they enter Gordon’s Bonus Game, where Multipliers and random prizes of up to five times the bet are hidden behind the Gordon Ramsay Hell’s Kitchen™ video slot menus.

Hell’s Kitchen™ was originally a British TV series created by Ramsay that has spawned numerous international editions and franchises. This includes the United States, where the 19th series of the multi-award-winning show is currently being broadcast on FOX, starring Ramsay.

Todd Haushalter, Chief Product Officer at Evolution commented: “This is a genuinely fun game that is rich with bonus features that are not found in any other slot. We pride ourselves on bringing new playing mechanics to the industry. The team did an amazing job with this game and they did a brilliant job capturing the essence of Chef Ramsay and Hell’s Kitchen. I am sure players are going to love it.”

The deal was brokered by Gordon Ramsay’s licensing agent, Global Merchandising Services, with Licensing Manager, Jens Drinkwater adding: “NetEnt’s reputation as a leader in creating branded entertainment products was a determining factor in working with them for the Gordon Ramsay Hell’s Kitchen™ video slot. We are proud of the game and are sure fans of the show will love it.”

Take a ride on the wild side in Reflex Gaming release Hell’s Hogs via Yggdrasil
The mighty Silverback gorilla comes to NetEnt with the launch of Silverback Gold™
NetEnt unveils Gonzo’s Gold™, the latest addition in its Gonzo series
NetEnt ready for lift off as it launches Starburst™ XXXtreme
Amelco integrates NetEnt into US platform
Divine Fortune™ Megaways™ goes live in New Jersey and Pennsylvania
Red Tiger, NetEnt and FashionTV Gaming Group partner to glam up the industry with the Trillionaire game
Pariplay offers big win potential in Wild Fruit Super Wheel
Lightning Box launches with Churchill Downs in Michigan