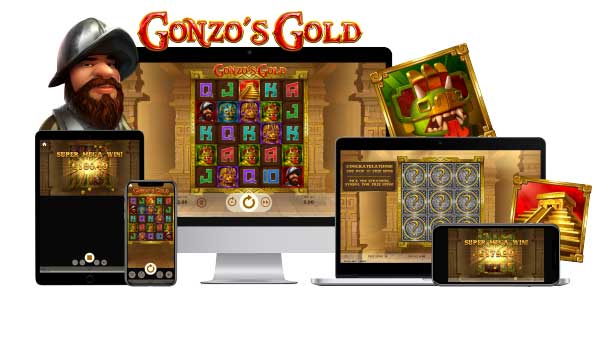 The magic of Gonzo has returned in the brand-new adventure released today, Gonzo’s Gold™. Set inside an Incan temple, this 5-reel, 5-row slot features the popular cluster pays™ mechanic and offers a highly volatile gaming experience.

Three or more Scatter symbols – represented by a golden pyramid – award 10 Free Spins and a bonus win. At the start of the Free Spins, a pick-and-click game transforms one symbol into the main feature of this game – the Expanding symbol. Land two or more Expanding symbols and they will expand to cover the entire reel or row, awarding the player with an additional win!

The Gonzo brand has been popular with players since the original Gonzo’s Quest™, released back in 2011.  Recently the franchise saw further success with Red Tiger’s release of Gonzo’s Quest™ Megaways™ and Evolution’s Gonzo’s Treasure Hunt™.

Todd Haushalter, Chief Product Officer, Evolution said: “We’ve put a bit of a twist on what players can usually expect from a Gonzo game, replacing the bet lines and transforming it into a cluster pays slot with a Free Spins expanding symbol feature. We’re always looking to challenge what people expect from a gambling experience, and this is an exciting new take on Gonzo. Both new players and those familiar with Gonzo are going to thoroughly enjoy this next stage in the journey.”