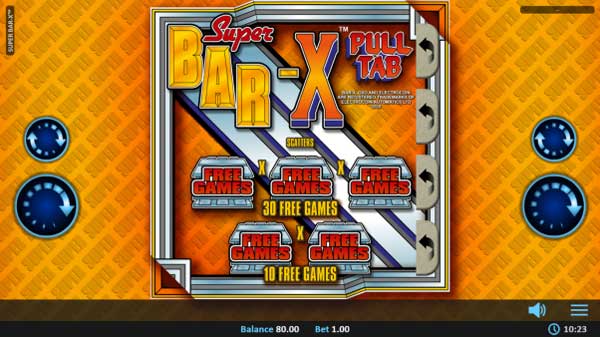 Based on the extremely popular land-based slot, the pull tab game has four tabs to pull per card and features a fun-filled Free Games bonus round that brings extra excitement to the game.

Inspired by features which are common in online slots, the Free Games bonus round is triggered when two or three scatter symbols appear in the window, awarding 10 and 30 free games respectively.

These are played on a separate set of tabs, where each win line can offer a multiplier from x2 to x10 to maximise the potential payout.

Super BAR-X™ Pull Tab, which has a maximum prize of up to 4000x the player’s stake, has gone live exclusively with Microgaming for a three-month period and will be released to the rest of the network in late October.

Robert Lee, Commercial Director at Realistic Games, said: “We’re thrilled to be launching yet another title in collaboration with Electrocoin and expect Super BAR-X™ Pull Tab will be equally as popular as our online slot version of the iconic land-based game.

“We’ve so far been pleased to see our adaptions of these classic games performing well with online audiences and are looking forward to expanding the collection further in the coming months.”

Gabino Stergides, President of Electrocoin, said: “After the recent success of the original Bar-X™ Pull Tab, we are
excited to see this latest version released and we have no doubt it will be as successful as its predecessor.

“We congratulate the team at Realistic Games for once again giving an old classic brand a new burst of youth and in
turn engaging a new generation of players.”