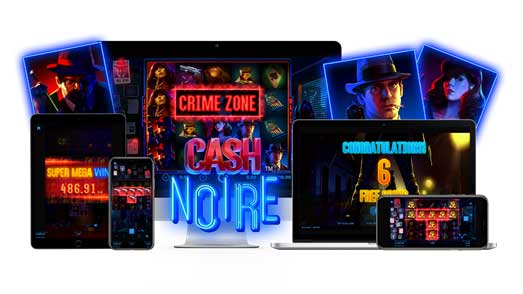 NetEnt is taking players to the criminal underworld in its new release, Cash Noire ™, where solving the case of the curious Green Ace murders will result in big rewards.

Set in the crime-ridden streets of San Cayetano, the 5-reel, 4-row game brings back the player-favourite proprietary Avalanche™ feature pioneered with Gonzo’s Quest™ with a new, engaging twist.

The popular mechanic creates fresh chances to win as symbols that form winning combinations disappear and are replaced by falling symbols, while mystery symbols that transform into random symbols make way for even bigger payouts.

The Free Spins round, triggered by collecting clues, adds to the slot’s excitement as players chase down a prime suspect through the street map to potentially unlock progressive multipliers.

In addition to its expansive set of features, Cash Noire™ offers an RTP of 96.06% as well as 1024 betways to maximise player anticipation.

“Cash Noire™ is a mechanically thrilling game set against the backdrop of a murder mystery that will leave players on the edge of their seats,” said Andy Whitworth, NetEnt Chief Commercial Officer. “With the return of Avalanche™ and a strong feature set which ramps up to solve the crime, the gameplay has huge engagement and retention potential and we look forward to it being enjoyed by a wide variety of players.”