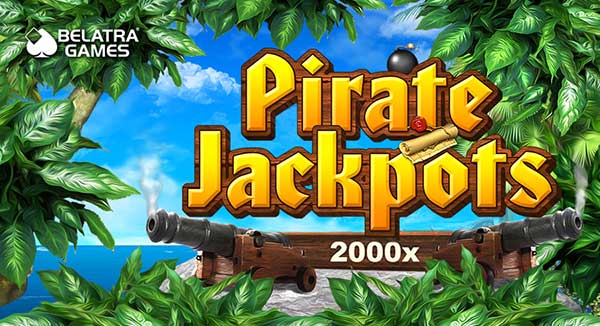 Swashbuckling players must voyage across the Caribbean in the hope of claiming a storied treasure filled to the brim with precious stones and gold. A jaunty sea shanty and rich graphics provide the perfect complement for this pirate-themed adventure.

Pirate Jackpots is a classic set-up, playing 5 reels that contain 3 symbols each. Winning combinations can appear on 20 pay lines and the Wild map scroll symbol is the Joker and has the ability to replace any game symbols to boost winning chances.

Free Games launch once three Scatter bomb symbols explode onto the reels. Three Scatters will award three Free Games, four Scatters will return five Free Games and five will grant seven Free Games. Each spin will continue until at least one of the Hatch, Pistol, Cannon and Golden Cannon appears in Free Games.   Every pistol found brings another spin and the hatch door will reveal its hidden bounty at the conclusion of the round. The standard cannon will shoot the jackpot directly above it once and the Golden Cannon takes three shots – the most lucrative Caribbean jackpot requires the most shots to complete. Players have a chance to win multiple jackpots should each progress bar hit the limit.
Sergey Chernyavski, Belatra Games’ Deputy Director, Sales & Marketing, said: “Swashbuckling slots fans will love this title and the challenge of claiming the pirate treasure in the Caribbean. There will be a player mutiny for those who miss out on this instant classic.”