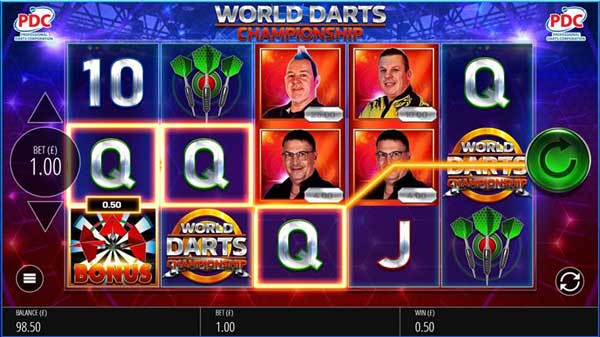 Leading slot supplier Blueprint Gaming has partnered with the Professional Darts Corporation (PDC) to develop a blockbuster new slot game where players step up to the oche in order to win big.

This new PDC branded game is Blueprint’s first foray into the sporting theme genre of online casino, demonstrating the company’s agile development program and ambitions to broaden the appeal of its portfolio even further.

PDC World Darts Championship is based on a highly successful classic format which is hugely recognisable to players across multiple markets. During the base game, a minimum of three dartboard scatter symbols awards the Free Games feature, and five symbols triggers the maximum 180 spins.

Before entering the feature, users can select to play with all the top stars from the PDC or take the gamble on the mystery pick, which randomly chooses one of the famous throwers and potentially eliminates the lower value players to ensure bigger wins.

Blueprint’s design and development team has gone above and beyond to include intrinsic details that will make the game appealing to all darts fans and casino players, including a symbol depicting the iconic Sid Waddell Trophy – as awarded to the World Champion – and incorporating official player imagery.

Barry Hearn OBE, Professional Darts Corporation chairman, said: “The global popularity of darts continues to grow, shown recently with the thoroughly enthralling 2020/21 World Darts Championship, which even given the current situation and absence of our iconic Ally Pally crowds, didn’t fail to disappoint in the drama stakes.

“Partnering with Blueprint Gaming for the development of this unique game is another important step to broaden the appeal of the sport to more people across the globe. They have a fantastic reputation within the gaming industry for developing high quality content and we had no hesitation in partnering with Blueprint for this special game release.”

Jo Purvis, Director of Marketing and Relationships at Blueprint Gaming, said: “Get ready for some quality darts action as we unveil PDC World Darts Championship as the first standout release from the Blueprint portfolio this year.

“Featuring the sport’s biggest and most recognisable characters, we’re offering an entertaining experience, backed by a proven casino format that will resonate with a large audience.”