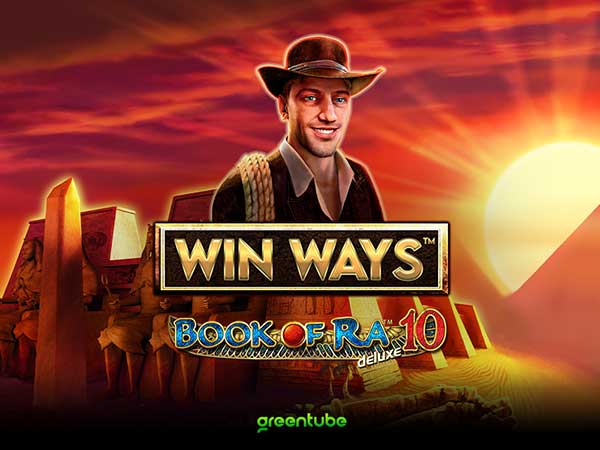 Greentube, the NOVOMATIC Gaming and Entertainment division, is transporting players back to ancient Egypt to worship the revered Egyptian god, in Book of Ra™ deluxe 10: Win Ways™.

This adventurous new 10-reel slot is played across two sets of reels which promise unpredictable and lucrative outcomes thanks to the Win Ways™ mechanic that allows up to a staggering combined maximum of 251,957 ways to win.

Book of Ra™ deluxe 10: Win Ways™ boasts Wild Transfers that see wild symbols land single, double, or triple stacked which will transfer over to the corresponding set of reels, should they happen to land on the first reel set.

Additionally, this feature-filled title will see players win 8, 12 or 20 free spins when 3, 4 or 5 scatter symbols land on reels 1, 3 and 5 on either set of reels. During this feature, one symbol is selected to become a special expanding symbol which may expand to cover all positions on the first reel set.

These special expanding symbols will automatically transfer over to the second reel set as stacked symbols and pay like the regular symbols, even on non-adjacent positions.

Steve Cross, Director of Games Development and Operations at Greentube, said: “There’s no denying that Book of Ra™ is by far one of the most successful slot franchises in Europe, so naturally we’re delighted to return to this iconic series once more.

“Not only does this slot feature all of the classic gameplay features players know and love, but it’s boosted heavily by the addition of the Win Ways™ 10 mechanic, that massively increases the win potential thanks to hundreds of thousands of extra ways to win.”