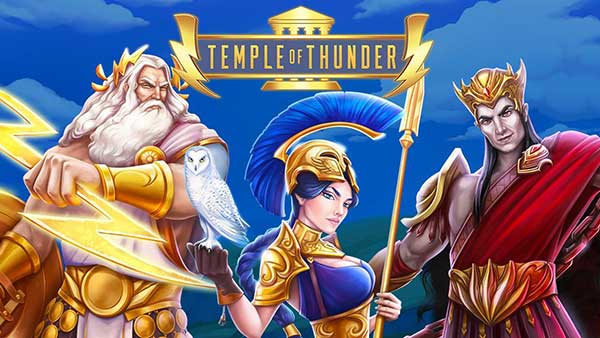 Game development studio Evoplay has announced the release of Temple of Thunder, an enthralling new slot that provides players with a Greek-themed, classical adventure.

Temple of Thunder takes place on Mount Olympus, where ancient Greece’s most powerful gods clashed with the mighty villains of Greek mythology. In order to seize the riches of Olympus, Zeus, Athena and Hades must once again fend off Medusa, Bahus, the Cyclops, and other vicious monsters.

The latest release features the exciting Betways mechanic, which matches symbols in any position on three or more adjacent reels, giving players a higher chance of landing a winning combination and taking home some impressive rewards.

Aided by powerful gods, the mighty beings can trigger a sweeping hurricane which synchronizes reels and increase the number of deities on the grids. This Reels synchronisation feature links two adjacent reels, which could expand to combine three or more reels.

Commenting on the launch, Ivan Kravchuk, CEO at Evoplay, said: “We’re excited to offer yet another story-driven title, with the latest release taking inspiration from the enchanting world of Greek mythology.

“The latest title takes our offering a step further, with Temple of Thunder featuring the popular Betways mechanic, giving players every opportunity to win big.”