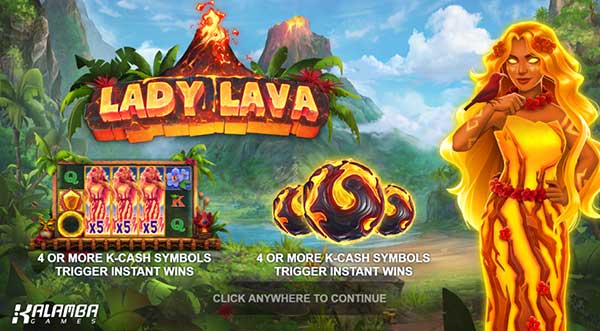 Kalamba Games has embarked on an adventure into a tropical paradise where volatility can erupt at any time from the volcano, as well as the gameplay, thanks to Lady Lava.

The guardian of molten-hot wins oversees a slots experience set against the backdrop of a lush jungle with a fiery, rumbling volcano at its heart.

Wins as big as the landscape itself can reach over 3700x the bet, landed from the 5×3 reel set and 20 paylines, populated by an array of colourful creatures that inhabit the game world.

Player-favourite feature K-Cash is available to Lady Lava players, with three initial K-Cash spins awarded if they hit six or more K-Cash symbols in any position. If all three reels are covered in lava balls, spins reset to three every time one of the fiery rocks is hit for huge potential wins.

Four Cashpot levels can be triggered randomly when four or five K-Cash symbols appear in any position to add to the anticipation for players as they chase down red-hot wins and appease Lady Lava.

“From the base game to the free spins round, the game is a volatile assault on the senses that we’re sure is going to have players cranking up the heat until the wins erupt!”