FunFair Games lifts-off AstroBoomers: To the Moon! into network-wide orbit 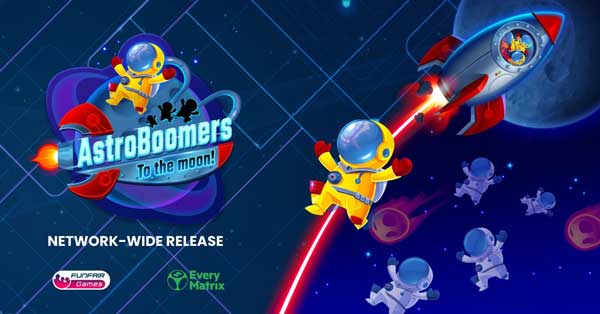 FunFair Games has announced the network-wide launch of its engaging real-money multiplayer title, AstroBoomers: To the Moon!

The astronomically exciting game takes communities of like-minded players on an intergalactic adventure, with otherworldly prizes of up to x2,500 available to those who eject from the rocket at the right time.

AstroBoomers: To the Moon! will be distributed via RGS Matrix’s ‘out of the box’ server, following a high-profile commercial agreement alongside EveryMatrix signed by FunFair Games in October last year.

The crash-style title’s network-wide launch comes hot on the heels of an exclusive debut with Betsson Group, featuring prominently on the homepage across many of the company’s major brands, including Betsson, Betsafe, Nordicbet and Casinoeuro.

Lloyd Purser, COO of FunFair Games, said: “We are thrilled to announce the network-wide rocket-launch of our exhilarating debut game, AstroBoomers: To the Moon!

“The absorbing crash title takes gamblers on an interactive adventure which is simple yet compelling, showcasing the community-driven experiences demanded by a new generation of players who are turning away from passive slot gameplay. We are confident that it will continue to prove hugely popular.”

Mathias Larsson, Managing Director of RGS Matrix, said: “FunFair Games is a ground-breaking content developer filling a gap in the market for real-money multiplayer games, and we have no doubt that its titles will be enthusiastically received, particularly by the emerging generation of player.

“We are therefore delighted to be launching AstroBoomers: To the Moon! across our ever-growing partnership network and look forward to introducing it to our clients.”