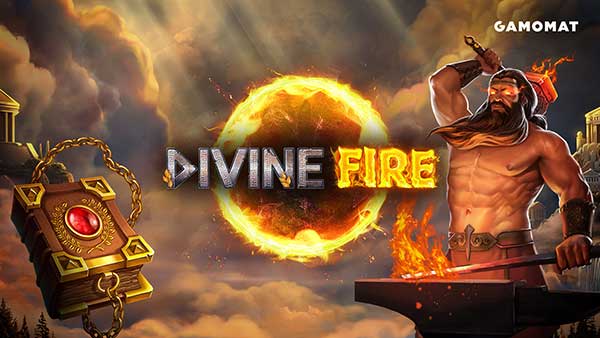 Monday 16th May 2022 – GAMOMAT, one of the leading independent software developers for slot games, is releasing its delectable title, Divine Fire, as part of the Fire Series on 19th May.

Set on Mount Olympus, Divine Fire is a book game which welcomes players to the abode of the gods. A powerful soundtrack complements the gameplay which helps create a dynamic experience and one that heightens tension on the reels. The game has a 5×3 design with 10 paylines and symbols that include an anvil, a mighty hammer, Hephaestus himself and a menacing bull.

A golden book represents the Wild and substitutes for all symbols except bonus symbols – the book also represents the Scatter. 10 Free Games will be triggered by 3,4 or 5 Scatters and it’s possible to win extra Free Games within the feature – where there is also a greater chance for Fire Repsins. Before beginning Free Games, a bonus symbol is assigned by a draw. Every symbol except the “Book” and “Fire Orbs” can become a bonus symbol.
Divine Fire is part of GAMOMAT’s Fire Respins series, which first launched with the popular Sevens Fire title. Five or more Fire Orbs will trigger three Fire Respins and the totals are awarded at the end of the round. Each occasion a Fire Orb is shown, it will reset the spins to three. The Orbs are labelled Mini, Minor and Major and a full screen, 15x, of Fire Orbs will set off the Inferno bonus.

The risk ladder and card gamble are possibly in play for players wanting to add to the gaming experience. Divine Fire is available to all ORYX operator partners via ORYX HUB and for social gaming via Whow.

Dietmar Hermjohannes, Founder & CEO of GAMOMAT Development GmbH said: “Hephaestus was the Olympian god of fire, smiths and craftsmen and our creative studio have produced a game worthy of his standing. Players will love the graphics and slick game play!”