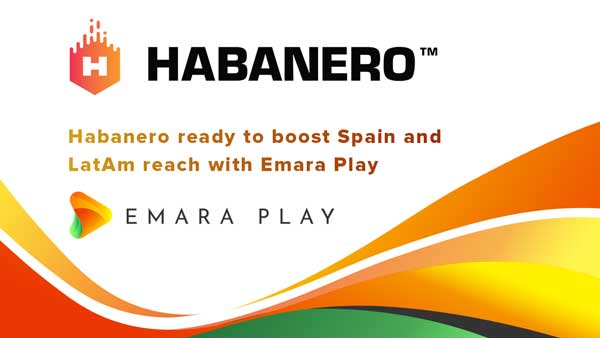 Habanero’s agreement with Emara Play will see the provider initially rollout its coverage across the LatAm region, with Habanero already having established itself as one of the continent’s favourite suppliers.

The deal will see Habanero bring its engaging slots, table games and promotional tools to the Spanish market following its full certification to the standards set by the country’s regulator, DGOJ.

The milestone will also allow Habanero to partner with a swathe of Spanish operators as it prepares to announce a series of high-profile deals in the near future.

The studio’s latest agreement also further strengthens its leading position in Europe, now live across 16 markets in the continent, as well as celebrating the recent acquisition of its MGA and ONJN licences from the Maltese and Romanian regulators.

“This deal is a testament to our commercial footprint in the European territory and beyond. We are delighted to partner with another important player in Spain, in a move that boosts our exciting and ambitious commercial plans for both the Spanish and LatAm markets. Stay tuned for plenty more announcements to come!”

“From the first moment we saw Habanero’s product we saw huge potential in it. They are a fresh and innovative company with a lot to offer the Spanish and LatAm markets. Our strategy is focused on local providers and quality games for our customers and Habanero will undoubtedly help us achieve that.”