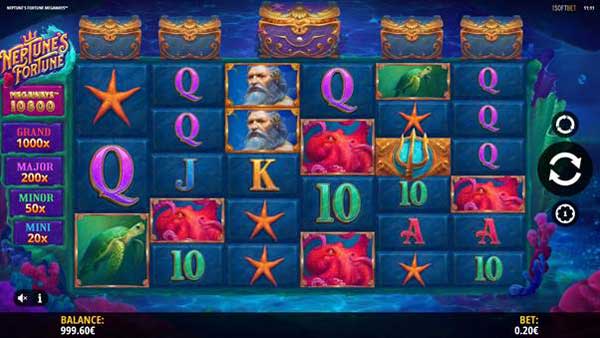 iSoftBet, the award-winning online games supplier and content aggregator, is inviting players to don their diving gear in search of sunken treasure in its latest Megaways™ title, Neptune’s Fortune.

The latest title in iSoftBet’s portfolio to incorporate the popular Megaways™ brand, Neptune’s Fortune Megaways™ transports slot fans to the underwater palace of the Lord of the seas, with the six-reel game offering up to 46,656 ways to win.

Every win triggers a cascading feature, where all winning symbols explode, allowing more to drop into their place and the chance to instantly boost your cash pot.

During base play, Pearl Wilds can trigger the treasure chests feature, which sees players given a choice to select different boxes of booty which can reveal win multipliers or the Neptune Fortune Bonus. This sees players select pearls to find three matching precious stones, which can reveal bonus jackpots of up to 1,000x a stake.

Four or more Trident Scatter symbols trigger the free spins mode, where all royal symbols are removed, leaving only high paying symbols and remaining wilds, while the cascading feature continues in this lucrative round.
The title is the newest addition to the supplier’s impressive slots portfolio, which has seen significant growth in Megaways™ offerings this year, as highlighted in recent releases Queen of Wonderland Megaways™ and Shining King Megaways™.

iSoftBet was recently a runner up in both the Game of the Year and Provider of the Year categories at the BigWinBoard Awards, while it has also been nominated for Game Provider of 2020 in the community voted Casinogrounds Awards.

Mark Claxton, Head of Games at iSoftBet, said: “Journey to the realm of the Roman God of the seas in our latest hit, Neptune’s Fortune Megaways™. Packed full of features and incorporating thrilling Megaways™ mechanics, any trip to the depths can see players return to land laden with wins.
“Our mission is to create amazing gaming experiences with our partners and their players at the heart of everything we do, and we have taken this to another level with our range of Megaways™ games in the last 12 months, listening closely to what players want and presenting them with a series of new and exciting visuals, features and mechanics within every iSoftBet release.”

iSoftBet is active in 19 regulated markets across the globe and provides some of the biggest operators with the best performing casino games and the quickest route to market.