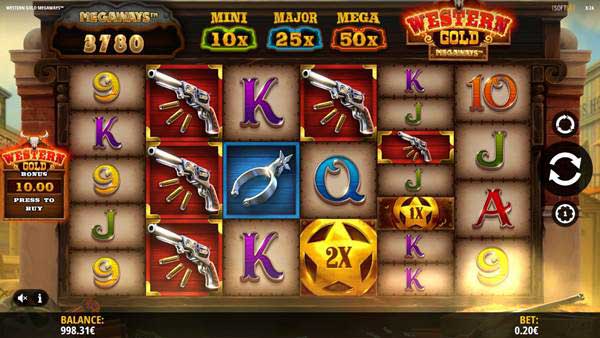 iSoftBet, the leading online and mobile casino content provider, has released the thrilling Western Gold Megaways™ to its network, following a successful exclusive period with operators.

Brands including Betsson, Stoiximan, Softswiss and 10cric have had exclusive access to the game before being rolled out to the iSoftBet network. The game proved incredibly popular with Betsson players, leading to Western Gold Megaways™ taking the crown as its most successful exclusive partner launch ever.

This new Megaways™ title, set in a frontier town of the Wild West, features classic cascading wins as well as a random “Max Megaways” modifier which can trigger at any time, guaranteeing the maximum number of 117,649 ways and a shot at multiple cascading wins.

Western Gold is the much-anticipated follow-up to smash hit Aztec Gold and is the sixth Megaways™ licensed title to be released by iSoftBet so far in 2020, with more exciting collaborations to come.

Five or more Sheriff’s Badge symbols awards the Western Gold Cash Respins, where cash values or one of three jackpots can land. Every time more scatters land on the reels, the respins will reset and if an entire reel is filled with Sheriff’s Badges, all values on that reel are multiplied by the number of symbols on the reel to produce some epic wins.

Mark Claxton, Head of Games at iSoftBet, said: “Western Gold Megaways™ transports players to the badlands of the frontier in a dash to find riches while enjoying a thrilling gaming experience.

“Featuring the popular Megaways™ mechanic as well as a Hold and Win bonus round, players have the chance to win enormous sums in the Wild West town where the Sheriff rewards good behaviour. We can’t wait to see how it is received by our fans across the globe.”

Ciara Nic Liam, Product Director GOC at Betsson, said: “Western Gold Megaways™ has been one of our most successful exclusive releases in 2020. We are delighted to have been one of the first partners to get access to such an exciting game, and our players absolutely love it. We look forward to working closer with iSoftBet on their upcoming releases.”

iSoftBet is a leader in compliance, licensed in 18 regulated markets worldwide, providing brands with the highest quality casino games and maximum speed to market.