iSoftBet unearths riches of the Egyptians in Pyramid Pays 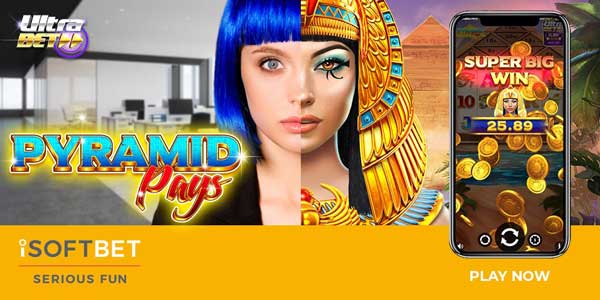 Pyramid Pays contains the Ultra Bet mechanic, where players can trigger it to play 50 games for 50x their bet. During this mode, stars can be collected to win additional prizes, including multipliers and cash rewards.

Taking an iconic theme, the supplier’s latest big win potential hit combines symbols from Egyptian lore, such as the Cat goddess Bastet, as well as the Eye of Horus, scarabs and Ankhs, alongside classic gambling icons such as Kings and Aces.

The 5×3, 243 payline hit requires a Pyramid scatter symbol to land on reels 1, 3 and 5 to trigger free spins. During the bonus mode, the Pyramid Pays feature can be activated if the scatter falls in the same reels again. If the Pyramid Pays mode is triggered with a booster symbol on the fifth reel, then all values are doubled.

A wild multiplier can land on reels 2, 3 or 4 which will multiply any winning combination they are in by 2x.

Three scatters in free spins sees the Pyramid Pays mode activated, where a cash pyramid contains nine prizes, one of which is highlighted at the start of the feature. Every time this feature is triggered, a value is chosen at random and awarded to the player, with the game offering the chance to win up to 3,840x their stake.

Pyramid Pays is the latest hit released by iSoftBet, which recently won the Game Narrative award at the CasinoBeats Game Developer Awards for its flagship 2021 title, Moriarty Megaways™. This award celebrated the slot with the most engaging gameplay, developed through creative themes to tell stories and take players on a journey. iSoftBet’s Moriarty Megaways™ saw the use of voice actors and immersive environments to truly bring the tale to life.

Vowing to inspire and entertain players in its brand manifesto earlier in the year, iSoftBet places its employees, partners and audiences at the heart of the development process.

Mark Claxton, Head of Games, iSoftBet, said: “Pyramid Pays takes an iconic theme and adds a thrilling iSoftBet twist in our newest epic Egyptian adventure. With a Pyramid Pays feature which awards random sums to players whenever it is triggered, alongside wild multipliers and big win potential, it’s another hit that adds yet another amazing experience to our portfolio.

“We’ve enjoyed great success with our immersive product range so far in 2021, and we’re very delighted to add this to our collection.”