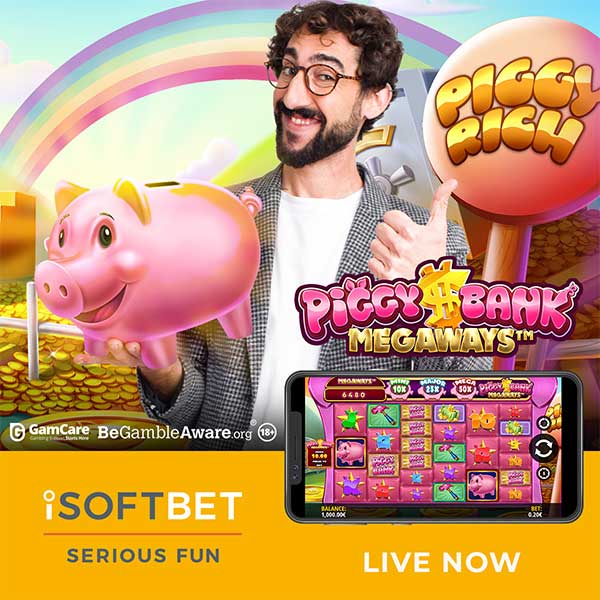 Following an exclusive period, this top-performing game is now available to iSoftBet’s global operator network, taking players on a slot adventure where they try to break the bank.

If five or more scatters land, the Piggy Rich Cash Respins are unlocked, where cash values, or one of three jackpots, are collected and will reset the respins every time they land to keep the cash coming.

Filling an entire reel with scatters during the feature triggers a multiplier, where all the values on that reel will be multiplied by the number of spaces on the reel, leading to some colossal wins.

The popular Megaways™ mechanic sees every win trigger cascading symbols and, with up to seven symbols per reel, a maximum of 117,649 ways are available for a lucrative Max Megaways™ spin.

The Piggy Bank logo is the top paying symbol in the game, awarding 25 x bet for six of a kind, while the piggy bank, cash stash and hammer symbols complete the high value awards.

Piggy Bank Megaways™ was first launched exclusively last year in partnership with Betsson Group, and the title has since seen great success with players in numerous European markets.

Mark Claxton, Head of Games at iSoftBet, said: “Piggy Bank Megaways™ offers a fun theme and thrilling features which, when coupled with the proven and popular Megaways™ mechanic, provides great slot action and entertainment for the players.

“Our expanding portfolio of Megaways™ titles has gained great traction with players around the globe and after a successful exclusive period we are thrilled to be launching this top-performing game to a much wider audience.”