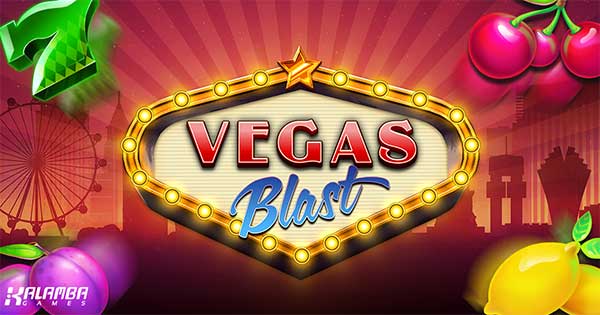 Kalamba Games is focusing on huge instant wins in its latest slot release Vegas Blast, which will see players taken on an old school thrill ride, paying homage to classic fruit machines but with modernised features and mechanics synonymous with the studio.

Vegas Blast will have players creating matching combinations of different fruit, bar and seven symbols across the slot’s 20 paylines to get lucky, with in-game wilds able to substitute all classic symbols and aiding in the creation of wins.

Additionally, the base game is home to K-Cash golden coin symbols, each with a varying amount of instant win prizes attached. Six or more of these must land in a single spin to unlock their riches. Situated to the left of the game, incrementally increasing Cashpot prizes have a predetermined amount ranging from 10x to 1,000x the players bet.

The K-Cash symbols have been augmented in the free spins round, as landing six or more triggers K-Cash Spins which will award one resetting respin for each successive K-Cash symbol landed and with them now also having the ability to award an additional multiplier. The potential of this K-Cash Spin round to award Vegas Blast’s 10,590x max win will be truly gripping for all players.

The Kalamba signature feature HyperBonus also returns here, giving instant access to the free spins round with eight, 12 and 15 free spins on offer which would typically be won from landing bonus symbols.

Alex Cohen, COO and Co-Founder at Kalamba Games, said: “Giving our players a true Las Vegas feeling was a driving force during the creation of Vegas Blast and whether it be through the symbols commonly associated with land-based casinos, the life changing wins on offer or the highly stylised Vegas backdrop we feel we have encapsulated the magic that Sin City has to offer.

“Vegas Blast is filled with our exciting Kalamba features that are enhanced further during the bonus game and this will give players a true crescendo of features that makes this title a unique experience.”