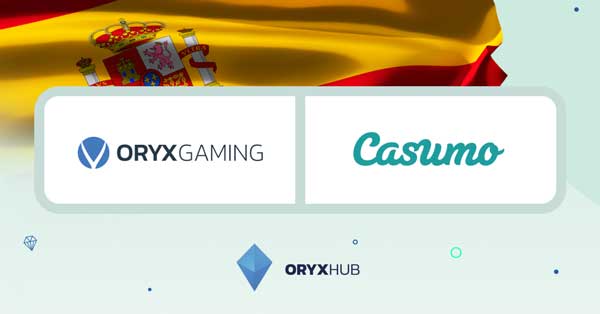 ORYX Gaming recently made its market debut in Spain and has now strengthened its foothold in the country after taking its games live with Casumo.

Casumo is the second operator in Spain to launch ORYX’s unique RGS content to its customers, including titles from GAMOMAT.

Content from GAMOMAT, including fan-favourites Red Hot Firepot, La Dolce Vita, and Books & Bulls is already popular with Spanish players as it is among the absolute top content in the country’s land-based sector.

Spain is the latest in a number of major jurisdictions where ORYX has launched and is certified and compliant. The Spanish online gaming market has seen strong growth since it opened in 2011 and has recently been greatly boosted by the online casino sector which now represents nearly 40 percent of market gross gaming revenue.

Since its inception in 2012, Casumo has grown into one of the most distinctive, innovative online casino brands and sportsbook operators in Europe. Casumo was granted an online licence in Spain in July last year following a third tender process and joined a list of around 80 betting and gaming operators now licensed in the country.

Matevz Mazij, Managing Director of ORYX Gaming, said: “Expanding into new markets is a big part of our strategic plan so we are thrilled to strengthen our presence in Spain with this Casumo deal.

“Casumo is the perfect partner for us as they have quickly established themself as a fun and entertaining casino brand and we look forward to working together to further enhance their offering. This partnership will also open the door to further deals in Spain and we see great potential in this market going forward.”