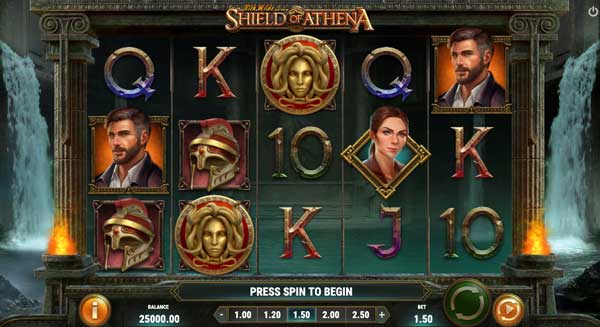 Play’n GO have announced their latest release today, another chapter in the adventures of their most prominent character Rich Wilde titled Rich Wilde and the Shield of Athena.

Rich Wilde has spawned a string of successful games for the slot supplier, with previous adventures including Pearls of India, Book of Dead and his most recent outing Tome of Madness.

Rich Wilde and the Shield of Athena is a 5×3 slot that sees the infamous explorer travel to the lost city of Atlantis in search of the legendary Shield wielded by the goddess Athena.

Once again Play’n GO have created a slot with mythological origins and have taken it further. The theme is based around the Aegis, a fabled shield bearing the head of the gorgon Medusa, whose gaze could turn people to stone.

The narrative has also been extended to the game’s re-spin feature Wilde Re-Spins, which sets winning paylines in stone before re-spinning, giving players the chance to collect more wins through the re-spin.

Rich Wilde is a popular character in the slot world, and CEO Johan Törnqvist spoke about his latest adventure:

“Rich Wilde is a beloved slot character, and we know players are always ready for another adventure. But it’s important that we make sure that his games, like our other titles, are of the highest quality, and worthy of the name.

Shield of Athena is an amazing game, visually stunning with entertaining features for players to enjoy; the perfect game to continue Rich Wilde’s legacy!”

Rich Wilde and the Shield of Athena is available to play online today.