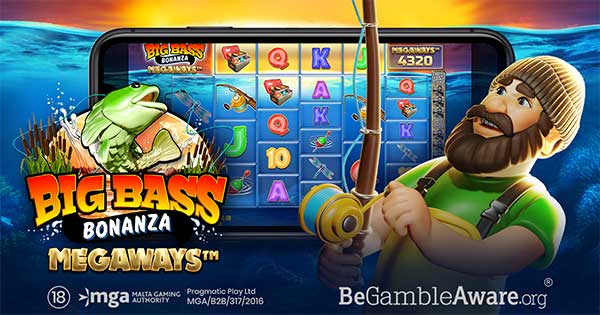 At its heart, Big Bass Bonanza Megaways™ maintains the angler’s dream of reeling in as many prize-bearing fish symbols as possible in the Free Game feature, only this time, everything is in a larger format.

Thanks to a tumbling win system, winning combinations are paid and then removed from the reels, with fresh symbols falling into the empty spaces, forming additional combinations until no wins occur.

Landing three, four, or five scatter symbols triggers the Free Game feature, awarding players with 10, 15, or 20 free spins, respectively. In the Free Game, fish symbols are not removed from the reels as part of the tumble feature, rather they fall to the bottom of the screen as tumbles occur.

Dynamite and Bazooka features are available in the Free Games feature, with the former adding fish symbols in random positions on the reels, and the latter occurring when two Fishermen are in view with no fish, exploding all symbols in view, except for the Fishermen.

Big Bass Bonanza Megaways™ arrives on the heels of Bounty Gold™ and Mexican-inspired title Big Juan™, as well as recent hit John Hunter and the Quest for Bermuda Riches™, which reside amongst a collection of over 200 HTML5 titles in Pragmatic Play’s award-winning games portfolio.

“We are delighted to be able to breathe new life into a series that has become a staple of our collection, and to launch yet another product in collaboration with Reel Kingdom.”