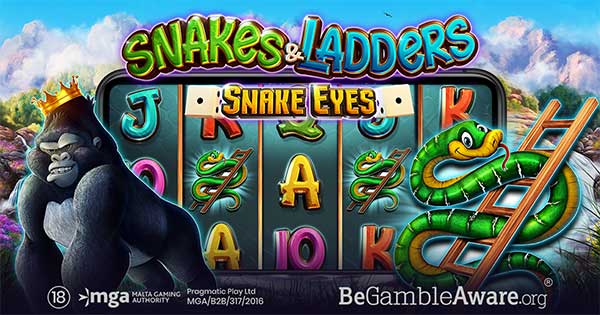 This sequel to the hit game Snakes & Ladders Megadice™ is played across 5×3 reels and features returning popular symbols like bananas, gorillas and snakes. These are joined by a wild multiplier depicted as a dice, which substitutes all symbols in game except the scatter. Each wild dice landed can have a one, two or three appear on it representing the size of the multiplier it also carries.

Three bonus symbols unlock entry to the bonus round. Here, players climb a snakes and ladders game board, home to 144 spaces which can award either a cash prize, a banana symbol that increases the prizes on the board, or a hidden shortcut that moves the player to a higher position. Like the much-loved board game, ladders move players up whereas snakes move them back as they attempt to claim a 1000x prize for reaching the final position in the game.


Movement is triggered via the roll of two dice with up to 16 rolls awarded for landing five scatters. Matching numbers on the dice grant one additional roll, with four matching dice needed in total to reset the board allowing players to collect more prizes and try again to reach the end.

Snakes & Ladders Snake Eyes™ follows in the footsteps of recent hits such as Gems of Serengeti™, Sword of Ares™ and Big Bass Bonanza – Keeping It Reel™ which reside amongst a collection of over 250 titles in Pragmatic Play’s award-winning games portfolio.

Irina Cornides, Chief Operating Officer at Pragmatic Play, said: “Building upon the popular predecessors’ success allows us to integrate the fan favourite mechanics found in the original and further develop them, offering players the possibility of extra rolls of the dice and of retriggering the entire bonus game.

“These additional elements maximise the game’s appeal to both new and existing fans and these new features will undoubtedly consolidate the popularity of the franchise.”