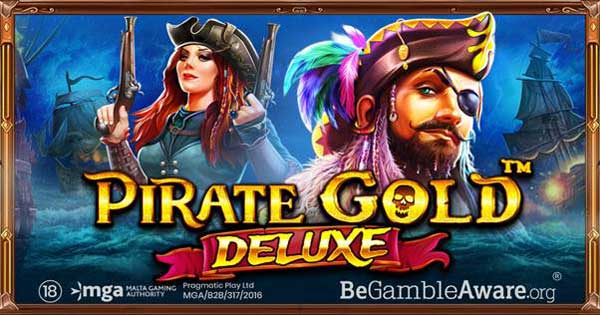 Pragmatic Play, a leading content provider to the gaming industry, has added another hit to its deluxe range with Pirate Gold Deluxe.

The 4×5, 40-payline game sees the return of Pragmatic Play’s fearsome crew of pirates as they scour the seas looking for booty in this innovative hold and win style title.

Players will look for treasure bags on the reels with them acting as Money Symbols. If eight or more land on the reels then the Re-Spin Bonus is triggered.

During the Bonus Feature, all previous Money Symbols will remain on the reels while respins occur to fill up the remaining spots. Players get three respins, with the count resetting in case of a successful spin.

Each Treasure Bag that lands during the Respins Mode will have either a monetary value, a retrigger or a multiplier, which can lead to huge wins. If a player lands a bag in all 20 reel positions, they will win the Grand Jackpot of up to 1,000x their bet.

Pirate Gold Deluxe joins other Pragmatic Play favourites such as Aztec Gems and Great Rhino in the supplier’s ‘Deluxe’ range, alongside its growing slate of slot games, including top-performing Wolf Gold.

Lena Yasir, Vice President at Pragmatic Play, said: “Pirate Gold Deluxe invites players back onto the high seas to join our hearty crew as they hunt for treasure. With a fun-filled hold and win style Bonus Round, any spin could turn into a lucrative win.

“We continue to add new and innovative games to our portfolio, as well as refining current classics. Our approach to game development continues to bear fruit and we’re eager to see how Pirate Gold Deluxe is received by our fans.”