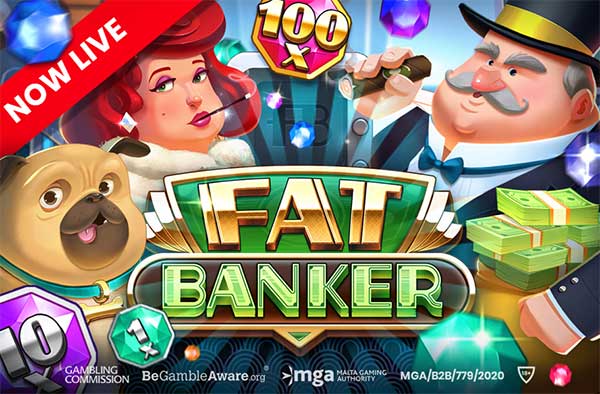 B2B gaming supplier Push Gaming has announced the network-wide release of Fat Banker, the latest in its player favourite Fat series of titles.

The 1920s-themed game will be available to all partners across regulated markets and releases hot on the heels of recent hit titles like Nightfall and Fire Hopper.

Players will be exploring a life of opulence in Fat Banker with gameplay set in front of the iconic Manhattan skyline. This 50 pay-line game is home to symbols depicting top hats and cigars, alongside the banker’s wife and dog, which must all form matching combinations to award a win.

Bullion symbols can be landed across all reels and award bet multipliers up to a value of 100x, requiring a silver safe to be landed on reel six for their prizes to be awarded.

Additionally, the Red Car feature can be triggered at the end of a spin. Here, Wild Money Bags with multipliers attached, Bullion and Silver Safe symbols can be added randomly to the reels increasing wins. Landing the Fat Banker himself in conjunction with a Wild Money Bag awards entry to the Free Spins round.

Five free spins are initially awarded, and from there, the Banker symbol will begin to move to any Wild Money Bags landed, collecting them and increasing the progress meter. The more this is filled the bigger the Fat Banker will grow, also awarding extra free spins. Money Bag symbols can also be landed with a multiplier, which is collected and accumulated, multiplying any win created by the banker thereafter.

Within the free spins round, the Red Car mechanic present in the base game has been upgraded to a Gold version. When triggered, Wild Money Bags or a random number of instant prize symbols can be placed across the game grid. These help to increase the banker’s size and can award additional free spins.

The release of Fat Banker sees the fourth instalment in Push’s popular Fat series, one that has been celebrated for its sense of humour and trademark graphical charm that has dominated throughout the original Fat Rabbit, then continuing with Fat Santa and Fat Drac.

Commenting on the release, James Marshall, CEO at Push Gaming said: “Fat Banker expands upon our much-loved Fat Series whilst adding its unique twist on the growing franchise.

“I’m proud of our team’s work to bring a fresh 1920’s theme, new instant win prizes, multipliers, and additional features to the franchise. We are looking forward to adding this release to our growing portfolio of high-quality hits and are excited to see players’ reaction to it”