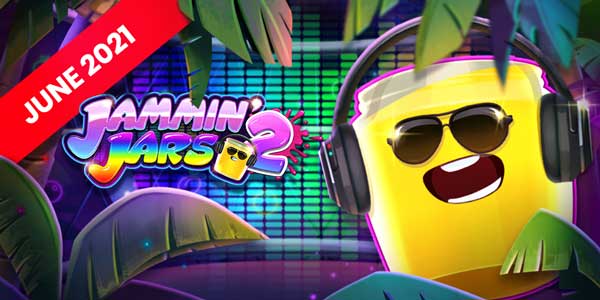 B2B gaming supplier Push Gaming is set to notch a significant milestone to its portfolio this summer, with the release of a sequel to its smash hit, Jammin’ Jars.

Confirmed for June 2021, Jammin’ Jars 2 is set to be one of Push Gaming’s most highly anticipated game releases for the year.

Launched in 2018, the original Jammin’ Jars has proven itself as one of the industry’s grooviest releases, inviting players to get onto the dancefloor and jive with Jars.

The game includes a Rainbow Feature and Funky Free Games that can bring massive multipliers and exciting wins. Established as a true player favourite, the slot continues to delight fans across the globe.

The release of Jammin’ Jars 2 will also introduce the brand-new Giga Jar feature, that will bring even more excitement to the slot’s well-loved disco theme.

The supplier has plenty of other plans that will be supporting the launch for Jammin’ Jars 2, with further announcements set to be made in the coming weeks.

“We’re all about making games that can stand the test of time at Push Gaming. In recent years, we have continuously received positive feedback from both players and partners on Jammin’ Jars, and we are now finally delighted to say that Jammin’ Jars 2 will soon be a reality.

“With the launch four months away, we’ve got some exciting news to announce ahead of delivery day, with well-known industry personalities and big-name casinos getting in on the action. We’ve also got so many colours, themes and variations to play with, that I’m sure we’ve got an incredibly funky series lined up to delight players for years to come.”

Marking its tenth anniversary last October, Push Gaming has continued to go from strength to strength this year following the acquisition of its MGA and UKGC-licensed platform in February 2020.

Established as one of the industry’s most entertaining suppliers, Push Gaming is live across several regulated European markets – counting the likes of GVC, William Hill, Mr Green, Casumo, LeoVegas, The Rank Group and Gamesys as valued partners.