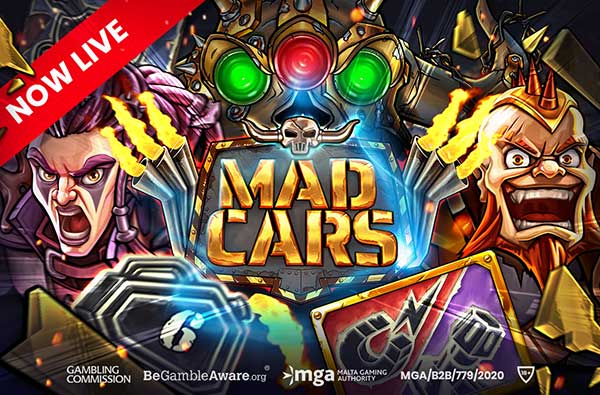 The adrenaline-filled title will be available to all partners across regulated markets and releases hot on the heels of recent hit titles like Fat Banker and Nightfall.

Players will be buckling up to face this futuristic wasteland, which holds 5×6 reels filled with wrenches, traffic cones, wheels and the remaining survivors of the world.

Instant prize car symbols are also bet multipliers that race to the top of the reels. Cars can pass the top reel once per race and will grant an instant win with multiple cars being able to finish at the same time.

A boost reel is present throughout the base game and will reveal symbols for each spin that can award multiple upgrades for the car they align with including multipliers, gas and combinations of the two, survivors or blank boosts.

Mad Cars’ free spins are awarded for landing the scatter car symbol in the base game with it then needing to win the race to unlock the bonus round. Seven free spins are awarded and players are tasked with upgrading instant win cars before they reach the top of the reels, where they grant an instant cash prize and extra free spins.

Additionally, a mad race feature can be triggered after the last free spin, which pays every instant prize car left in the race regardless of their position and this is instrumental to awarding the title’s max win of 25,000x.

Mad Cars’ design is a departure from the usual light-hearted fun tone seen in many of Push Gaming’s previous releases such as Jammin’ Jars or Fat Rabbit but demonstrates the provider’s ability to create titles that cover a vast array of themes ultimately catering to its diverse and ever-growing global audience.

Commenting on the release, James Marshall, CEO at Push Gaming said: “Mad Cars delivers our players a title unlike any other on the market, it will see symbols racing to the finish line across the reels upgrading their wins as they battle for first place.

“I’m incredibly proud of our team’s work in creating such a transformative and unique post-apocalyptic designed title. These elements coupled with a max win of 25,000x means that we are particularly excited to see player’s reaction to this highly immersive game.”