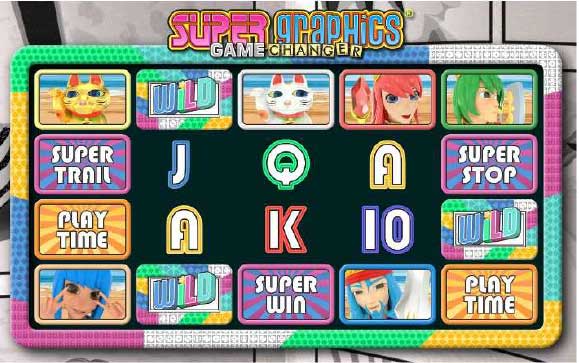 Leading casino content developer Realistic Games has revamped one of its most popular titles with the network release of Super Graphics Game Changer™.

The original Super Graphics Upside Down continues to be one of the supplier’s top-ranking releases, spawning a series of slot and instant win games featuring the game’s well-loved anime theme and leading loveable character Satsuki.

Realistic has now brought new levels of engagement to the 5-reel, 40-line slot with the addition of the Game Changer feature round, offering players the chance to win a staggering prize of up to 100,000x their bet on over four billion different feature board layouts.

The title will be the sixth Realistic Game Changer™ slot to hit online markets, but in this iteration, as players move around the game board, they collect Free Spins and super Wilds to take with them into the free spins round once the feature comes to an end.

The game’s heroine, Satsuki, awards three extra spins, while the White and Gold Cat offer two, and the King, Queen and Jack award one free spin.

As players land on any Wild symbols, these will count to an upgrade to take into the feature. The more wilds hit, the more exciting the wild symbol in the free games.

These range from Exploding Wilds to Roaming or Trapped Wilds, with some ‘left and right’ and ‘up and down’ wilds in between, ensuring the free spin round delivers a wide range of exciting prizes.

After a two-week exclusivity period with GVC Group, when one lucky Ladbrokes player won the 100,000x top prize and claimed £20,000 from a 20p stake, Super Graphics Game Changer™ is now available to Realistic’s entire network.

Robert Lee, Commercial Director of Realistic Games, said: “Super Graphics Game Changer™ is the perfect combination of one of our most popular game titles and the innovative bonus round mechanic which has transformed our portfolio.

“Adding in the fact that this is our first ever 40 win line slot along with the affordable entry level of just £0.05 per spin, it offers players spectacular winning potential, which we have already seen at Ladbrokes, creating the perfect recipe for a game that will keep players returning time and time again.”