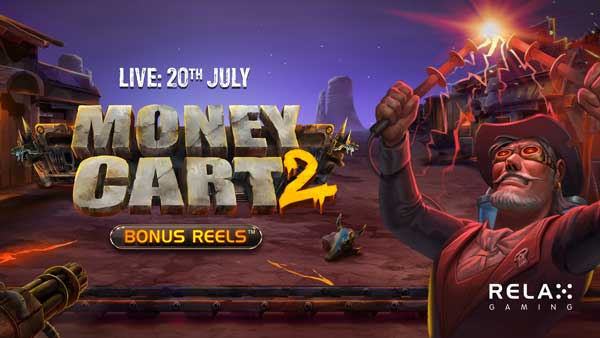 This latest instalment in the Money Train series sees the crew from the original hit reunited in a game that is ideal for fans of high volatility games.
Having been pioneered by Relax Gaming, Bonus Reels is a first for the industry, which brings a new approach to localised content, debuting with a slot tailored to one of Relax Gaming’s key regulated markets.
The 5×4 slot leaves the base game behind and takes players straight to the action through the Bonus Reels feature and a theoretical RTP of 98%.

Players will find familiar characters including Payer, Collector, Sniper and Necromancer on a rampage for wins, with Persistent symbols taking things up a notch through added features.

With character combos, re-spins, free spins, and new reels to unlock, there’s no stopping the thrills this ride provides. When all possible reels have been activated and all positions occupied, the round comes to a screeching halt, awarding 500 coins while the maximum win stands at an impressive 50,000 coins!

Intuitively designed animation is combined with an engaging soundtrack to augment the gameplay, ensuring Money Cart 2 Bonus Reels is an essential addition to any UKGC licensed operator’s library of games.

Commenting on the launch, Simon Hammon, CPO at Relax Gaming said: “This game is about taking one of 2020’s most popular launches and applying a truly innovative approach to ensure players can get the very best out of entertainment under present regulations.

“Built with the UK specifically in mind, we set out to deliver a frequent-hit feature while remaining compliant and I’m delighted to say we have achieved that goal and more.

“Money Cart 2 Bonus Reels™ not only has the benefit of a successful legacy, but it’s a great slot experience in its own right, with a host of engaging features ready to entice players. We’re hopeful that it will prove to be one of this summer’s hottest hits.”

Established as one of the industry’s leading B2B suppliers, Relax Gaming has celebrated four EGR B2B Awards earlier in July, including Innovation in Mobile and Casino Software Provider.

The supplier also secured two CasinoBeats Developer Awards at last week’s CasinoBeats Summit in Malta, as well as four additional nominations at the International Gaming Awards, to be held later this summer in London.

Now one of the industry’s leading aggregators, Relax provides more than 2,000 online casino games, from its high performing proprietary slots to a significant, varied library of content from hand-picked third-party studios via its partnership programmes