Return to the depths in latest Yggdrasil release Champion of the Underworld GigaBlox™ feat. Wild Fight™ 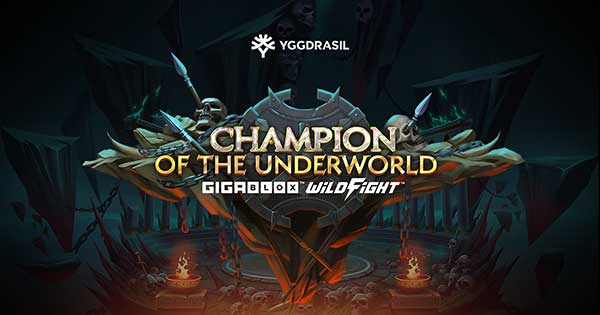 The 6-reel, 4,096 ways to win slot is driven by Yggdrasil’s signature GEM mechanic, GigaBlox™, that sees symbols connect to create supersized icons 2×2, 3×3 and 4×4 large. Champion of the Underworld also sees the Free Spins icon land as a GigaBlox™ symbol for even greater win opportunity.

This metal masterpiece also boasts Yggdrasil’s latest GEM, Wild Fight™, which is designed to have more Wild symbols to land on the reels during base gameplay. The mechanic sees Hades fight against any high-paying symbols on the reels and if he wins his battle, the symbol turns into a Wild.

Upon landing five or more free spin symbols, the Free Spins bonus will trigger, during which the Wild Fight™ feature triggers automatically on every single spin. Additionally, a lucrative Win Multiplier is charged by each wild that lands, climbing up to an impressive maximum of x25.
Players that wish to jump straight into the action can do so by utilising the game’s Buy Bonus feature, which can see them kick-start their gameplay with five or 25 free spins.

The title is the second part of Yggdrasil’s Underworld series, joining the popular Hades GigaBlox™ which is one of the supplier’s best-performing games. Champion of the Underworld is powered by GATI, Yggdrasil’s state-of-the-art technology enabling partners to employ the preconfigured, regulation-ready, standardised development toolkit to consistently produce cutting-edge content followed by rapid distribution.

Stuart McCarthy, Head of Product and Programs at Yggdrasil, said: “Champion of the Underworld is the second episode in our Underworld series which we plan to expand with even more exciting titles in the future, giving players thrilling and memorable gameplay.

“Champion of the Underworld is a slot that has all the makings of a classic, with great features and mechanics including two of our coveted GEMs, GigaBlox™ and Wild Fight™, and we’re confident players will love this game.”