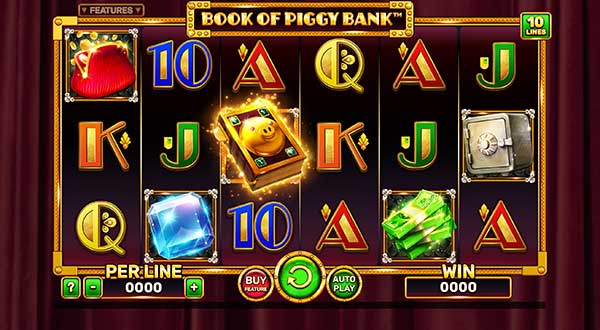 Spinomenal, the leading iGaming content provider, is celebrating Black Friday with the release of its exciting new game, Book of Piggy Bank – Riches. The game sits within the Classics series which exists within the Spinomenal Universe.

No one likes to save money, but everyone loves to break piggy banks! Spinomenal’s brand new game is a 6×3 reel design with 10 pay lines that gives players the opportunity to raid the Piggy’s bank of riches! This vibrant, money themed slot game takes you on a treasure hunt for cash and luxury with plenty of excitement and suspense mixed in along the way.

Stacks of cash, gold coins, bedazzling jewels and money vaults full to the brim are just some of the attention-grabbing symbols the player will find. In the background a jolly jazz soundtrack plays, making you feel as if you’re in the lobby of a Monte Carlo casino.

There is a wild symbol which pays, operates as a scatter, and triggers 10 free spins. During free games a random symbol is chosen to act as an expanding symbol creating more winning opportunities. The maximum win is x10000.

Players can continue to seek Piggy’s riches as three or more scatter symbols trigger ten free spins. At the start of each spin a random symbol is chosen to expand, and it appears in a window above the reels. It changes on each spin. During this phase, after any win pays out the chosen special symbol will expand to create new pay lines where the symbol does not have to appear on consecutive reels. This feature can re-trigger adding another ten free games.

Spinomenal’s CTO, Omer Henya, commented: “Book of Piggy Bank – Riches is an exciting treasure quest that oozes luxury and welcomes the return of Black Friday. Players will be able to cash in by following the Piggy’s path to riches, collecting fun, luxury items along the way. A lavish upgrade to a previously released game.”