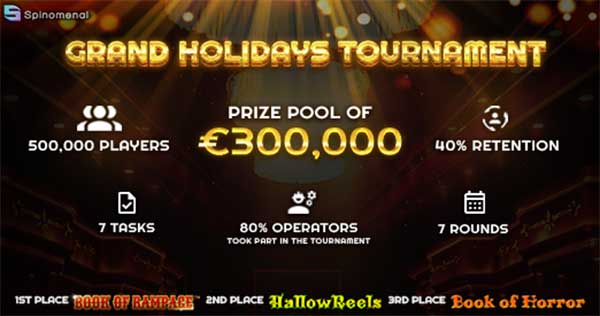 Spinomenal’s Grand Holidays Tournament is a pioneering promotion where 500,000 players competed to land huge returns from a Prize Pool worth €300,000. This seven-round tournament spanned three months, with four different mechanics and seven tasks. The seventh round of the promotion saw players compete for a €100,000 total.

The three most popular slots, calculated on the number of players, were Book Of Rampage (Round V), Hallow Reels (Round III) and Book Of Horror (Round II), respectively. Retention figures were very impressive as 40% of players who took part in Rounds I-VI went onto challenge in the concluding round.

Spinomenal’s CEO, Lior Shvartz, commented: “Our prestigious Grand Holidays Tournament feature is one that players really engage with for the chance to land life-changing prizes. The popularity
heightens round by round as the anticipation builds towards a bumper payout. A big thanks must go to our partners for helping make this such a success.”