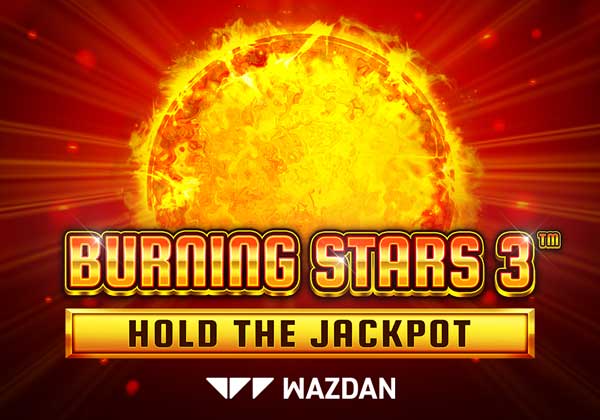 The 3×3, fast paced slot uses a matrix reels layout, with four or more symbols landing on any spin leading to a payout. During base gameplay, a Wild symbol substitutes for all others except the bonus.

Burning Stars 3™ is the latest Wazdan hit to offer a Hold the Jackpot bonus round, which is triggered when at least three Bonus symbols land in a single spin.

Utilising Wazdan’s Hold the Jackpot mechanic, any bonus symbols will remain fixed on the reels during the round, while the re-spin count, which starts at three, will reset if a new Bonus symbol lands on the reels. The session continues until either all nine-reel spots are filled or the count hits zero.

As players find more bonus symbols, the rewards counter will tick higher, starting at 3x and climbing as high as 2,187x if players find all nine and trigger the Grand Jackpot.

Burning Stars 3™ contains the features that have become familiar to all Wazdan players, including Ultra Lite Mode, Ultra Fast Mode, and Big Screen Mode. The stellar slot offers also a hugely popular Buy Feature, which allows players to purchase the activation of Hold the Jackpot bonus at any time.

“With four winnable jackpots including the mammoth Grand Jackpot of 2187x a player’s stake, player’s will be able to hugely enjoy Burning Stars 3™.”