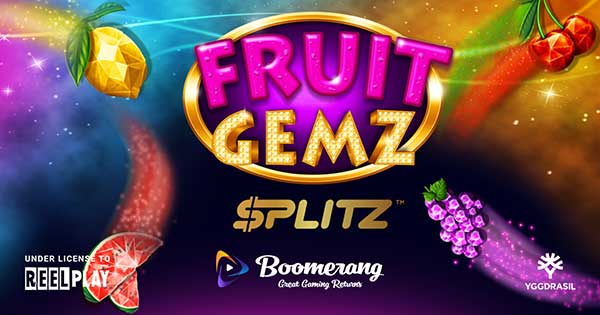 ReelPlay partner Boomerang has teamed up with Yggdrasil Gaming to bring players their sweetest slot to date in Fruit Gemz Splitz™.The five-reel slot can see paylines expand to up to a total of 19,773 as Splitz symbols land, splitting into up to four symbols, while Wilds, Cash Coins, and Collect symbols can also land at any given moment.

Boasting a retro feel, shiny fruits fill the reels, with an upper reel adding an extra symbol onto the middle three columns. In addition to this, Fruit Gemz Splitz boasts a lucrative cascading wins feature which sees all winning symbols removed and replaced on the reels.

When six or more Coins land on a single spin, the Hold & Respin feature is triggered awarding three spins. Coins land on the reels with values of up to 10x, as well as three jackpot coins – Mini, Major, and Mega which can award up to 888x. Every winning spin resets the count back to three.

When a collect symbol appears, all coins are immediately awarded for potential mammoth wins.

Fruit Gemz Splitz is the latest title by Boomerang to be added to the YG Masters portfolio via a cute deal with ReelPlay. The title is powered by GATI, Yggdrasil’s state-of-the-art technology enabling partners to employ the preconfigured, regulation-ready, standardised development toolkit to consistently produce cutting-edge content followed by rapid distribution.

Stuart McCarthy, Head of Product & Programs at Yggdrasil, said: “Fruit Gemz Splitz sees a popular retro theme combine with a Hold & Respin mechanic to make for an incredibly exciting gameplay.
“ReelPlay and their partner studios such as Boomerang continue to be a driving force as their games are amongst our most popular YG Masters content, and we look forward to this being another popular product in our portfolio.”

David Johnson, CEO at ReelPlay, said: “Fruit Gemz Splitz is a super Boomerang game concept and the fruits of another winning collaboration: combining ReelPlay technology and delivered to market under the YG Masters framework by Yggdrasil.”