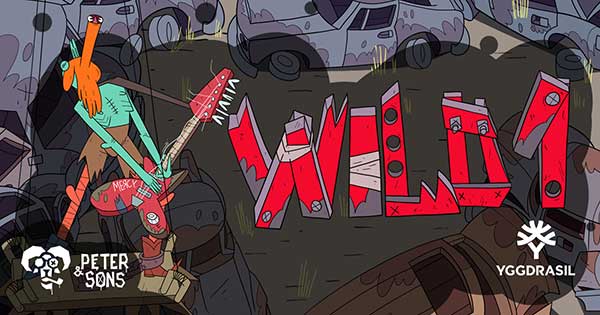 Peter & Sons and Yggdrasil Gaming have partnered up for a dystopian adventure where rusting wrecks border the reels in latest launch Wild One.

The 6×4, 4,096 payline title brings a high volatility gameplay combined with the studio’s distinct visual art style for an action-packed thrill ride, filled to the brim with features and wilds.

Cascading wins are present throughout the game, with all winning symbols dissolving and new ones dropping down. There is a top reel above the game which can see wilds queued up, landing onto the reels below if there is space.

Multiple separate wilds can land, including Unbreakable Wilds, Expanding Wilds and Multiplier Wilds, all of which can be unlocked as players progress through the tier levels. Unbreakable ones stay on the reels even when participating in wins, while Expanding ones cover the entire reels for enhanced win potential. Multiplier Wilds can create huge wins if they land in a winning combination, with multipliers of up to 10x able to land.

Two scatter symbols will trigger the Scatter Blast feature, which will remove all symbols in a 3×3 square around the scatter, triggering an additional cascade for an increased chance of launching the bonus round. Two scatter blasts will increase the Wild level as well, unlocking the different styles of wilds.

Three or more scatters will trigger the free spins, awarding at least 10 free spins. During this mode, players are transported to an underground reelset, where wilds appear more often throughout the round and modified wilds can land on any reel for spectacular win potential. There’s no limit to the amount of cascades that can land at any time, with a max win potential of 5,000x, and respins can be retriggered if three Scatters land again.

Stuart McCarthy, Head of Product and Programs at Yggdrasil, said: “Peter & Sons keeps going from strength to strength as part of the YG Masters program, recently winning an award at the CasinoBeats Game Developer awards, and with the depth of its offering you can see why.

“Wild One brings an intense, post-apocalyptic environment to life, filled with wilds as players look to pile up the wins amongst the wreckage of civilisation.”

Yann Bautista, Business Development Manager at Peter & Sons, said: “We look to bring immersive, exciting content to the market with all our games, while telling a thrilling narrative, and Wild One is no different.

“Packed with multiple styles of wilds, we’re able to bring huge win potential alongside a unique theme to create one wild ride!”