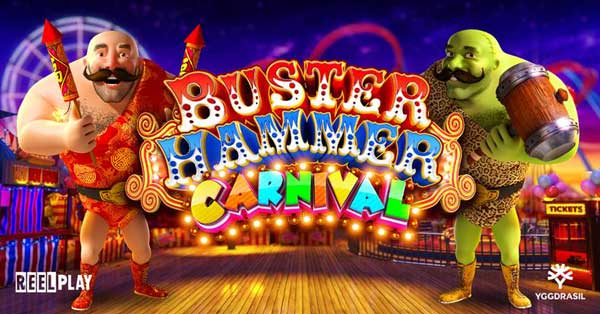 Yggdrasil Gaming, the leading worldwide publisher of online gambling content, is preparing for a festival of fun in new hit Buster Hammer Carnival, in partnership with ReelPlay.

Buster Hammer Carnival is a 5×5, 3,125 payline slot set within a bright and bustling Carnival full of colourful ways to win. ReelPlay’s animated hero strongman Buster awaits next to the reels ready to test his strength by smashing the High Striker if a Wild Hammer lands. On each reel, Gold Wild Hammers can appear, depending on how hard Buster strikes, creating huge wins through the expanding wilds.

If three or more scatters land, the Mighty Free Spins mode is triggered. The canopy of the big top expands to provide for extended reels offering a massive 32,768 ways to win.

Stuart McCarthy, Head of Partner Programs at Yggdrasil, said: “Buster Hammer Carnival is another fantastic addition to our YG Masters offering, combining the action of a thrilling slot with all the fun of the fair.

“ReelPlay has consistently delivered engaging content through the program and we’re looking forward to the continued relationship.”

David Johnson, CCO at ReelPlay, said: “As part of the YG Masters initiative we’re able to rapidly scale up our roadmap and unveil games to new partners with regularity and consistent success.

“We’re very fond of Buster and had some fun with his animations in this title where we extended his cheeky character. On top of this, all the key elements ReelPlay are known for are firmly there and we’re excited to see how Buster Hammer Carnival is received by players accessing the game via Yggdrasil’s operator partners.”