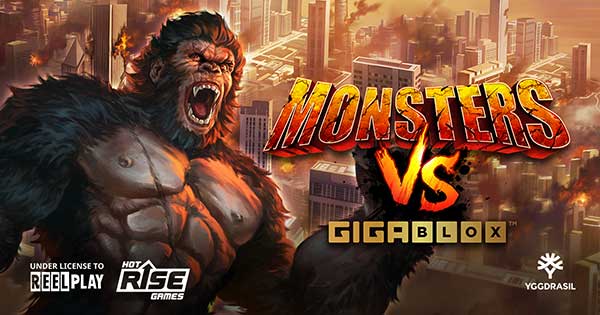 Yggdrasil Gaming and ReelPlay have joined forces to launch the latest release by Hot Rise Games, Monsters VS Gigablox™.

The title sees an epic battle of monstrous proportions taking place across a devastated city and features huge creatures fighting across the 6×6, 50-payline grid.

As with all games incorporating the popular Gigablox™ Game Engagement Mechanic (GEM), an oversized symbol will land on every spin, which can be anything from 2×2 to 6×6 in size.

A Golden crown acts as wild, while the ‘VS’ symbol is a scatter. Five or more of these are required to trigger the free spins, while it also acts as a paying symbol.

Up to 40 spins can be awarded, where huge wins await. The monster symbol that appears most on the reels during the triggering spin becomes the chosen champion, and if none appear, Kongo King is automatically chosen.

All Gigablox™ symbols in the bonus are Monsters only, while all wins containing wilds or the champion are paid double.

In certain jurisdictions, players can purchase the bonus via the buy feature for 75x their stake.

Monsters VS Gigablox™ is the latest Hot Rise Games title to be produced as part of the YG Masters portfolio, following Legion – Hot 1. As with all YG Masters titles, the game is powered by GATI, Yggdrasil’s state-of-the-art technology enabling partners to employ the preconfigured, regulation-ready, standardised development toolkit to consistently produce cutting-edge content followed by rapid distribution.

Stuart McCarthy, Head of Product & Programs at Yggdrasil, said: “Monsters VS Gigablox™ brings an exciting, apocalyptic environment to the reels as great denizens of the dark fight it out in a destroyed city.

“Packing in our Gigablox™ GEM makes for another thrilling addition to the YG Masters offering as we strive to create dynamic, unique content.”

David Johnson, CEO at ReelPlay, said: “ReelPlay have partnerships with many independent studios which allow us to showcase varied approaches to game development. We’re proud of our partnership with Hot Rise Games and our ability to enable them to contribute exciting products to the YG Masters offering.”