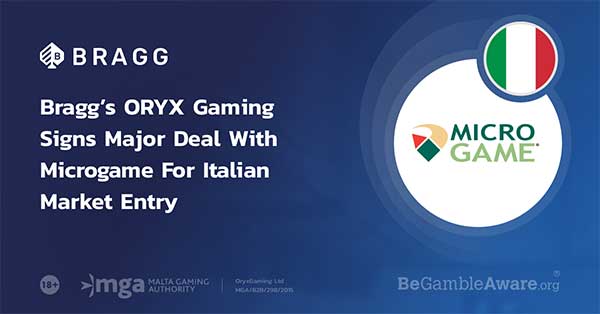 ORYX Gaming, a Bragg Gaming Group company (NASDAQ: BRAG, TSX: BRAG), is set to enter one of Europe’s largest and most established online markets after agreeing to distribute content with the country’s leading local operator Microgame.

Pursuant to the milestone partnership, Egyptian Magic, the debut title from Bragg’s recently launched Atomic Slot Lab studio, will feature in the selection of games made available to local players. In addition, an initial selection of titles from ORYX’s exclusive content portfolio will go live with Microgame with more games set to follow. Initial exclusive content titles will include Respins of Amun-Re, Golden Nights and Royal Seven, as well as other player favorites.

Italy became the first major country in continental Europe to regulate online gambling in 2006 and is now the second largest regulated online market on the continent with expected online casino revenues of US$2.3 bn in 2022, according to H2 Gambling Capital estimates.

With over 20 years of experience, Microgame is the leading gaming service provider in Italy, offering a comprehensive and flexible online casino and betting platform which powers many of the country’s premier online casino brands.

Chris Looney, Chief Commercial Officer at Bragg, said: “This agreement that will see us enter Italy, the second biggest online market in Europe, is another watershed moment for us and comes several months after we took our content live in the UK, Europe’s largest iGaming market, underlining our commitment to expand in large and established regulated markets.

“Our partnering with Microgame, Italy’s largest B2B provider, gives us access to numerous leading operators in the country, which will enable us to reach a wide local audience from the outset. It’s an exciting time for Bragg as we continue our growth trajectory in new markets with more expansion still to come.”

Marco Castaldo, CEO at Microgame, said: “Our goal is to bring first-class entertainment to our players and with ORYX content’s proven popularity, we are thrilled to be the first partner to introduce it in Italy.”