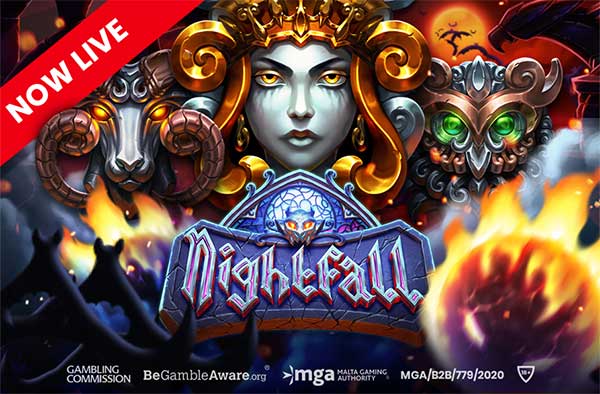 The aesthetically eerie title will be available to all partners across regulated markets and follows a string of recent hits from Push Gaming such as the immensely popular Big Bamboo and Bison Battle.

Nightfall’s spooky concept immerses players into a gothic-themed village at night, which provides the backdrop to gameplay. Players will be creating matching combinations of menacing symbols across the slot’s 20 pay lines to award wins.

Situated at the top of the reels, an ever-changing instant prize slab with varying win amounts is displayed. These are awarded for landing fireballs on the reel below, with three needed to destroy the prizes shown resulting in their win. Additionally, these wins can be increased further with fireball multipliers that can go up to 50x and can be instrumental in unlocking Nightfall’s 20,000x max win.

The player is initially awarded six free spins, during these spins the instant prize slabs no longer change between spins and retain the damage taken throughout the round. Three extra wild scatter symbols are required to award two additional spins and there is no limit to the number of retriggers available.

Nightfall is in sharp contrast, in terms of tone, to Push’s previous releases such as Jammin’ Jars 2 and Fire Hopper but showcases its talents in creating slots that cover a wide variety of themes, catering for its diverse fanbase that is accustomed to the studio’s player-first ethos.

Commenting on the release, James Marshall, CEO at Push Gaming said: “I’m proud of our talented team for adding a much darker-themed title into our extensive portfolio. Whilst simultaneously continuing our mission to deliver highly entertaining gameplay, with big win potential and offering unique features throughout.”

Established as one of the industry’s most entertaining suppliers, Push Gaming is live across the majority of Europe’s key regulated markets with the likes of LeoVegas, Entain, 32red, 888, Superbet, Betsson and PaddyPowerBetfair.