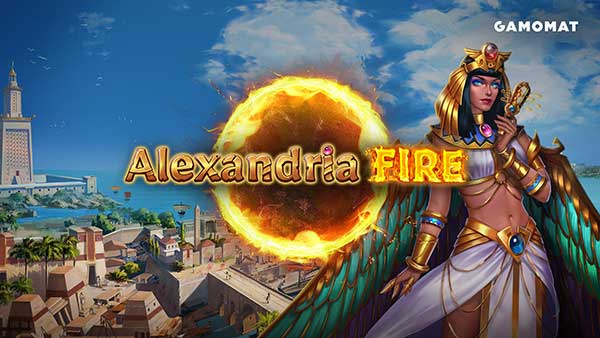 GAMOMAT, one of the leading independent slot game developers, is releasing the latest game from its fantastic Fire Respins series, Alexandria Fire, on 29th September.

This is the fourth title from the Fire Respins series and Alexandria Fire evolves in the Mediterranean port city in Egypt. Alexandria’s seafront has forever been protected by the beacon of the Pharos of Alexandria which was lit by patroness Isis. Today, the light threatens to dwindle, and it’s up to a hero with magical powers and Isis to return the flame to former glory.

Alexandria Fire’s Reveal Feature and Fire Respins deliver an epic experience on the reels. The Isis symbol is Wild and substitutes for all symbols except the Tower and Fire Orb. Tower is Scatter and 12 Free Games launch when 3 or more Scatters are shown and once active it will only include top winning symbols.

Isis guides players through the imperious stone gates for potential glory in Free Games where the Mystic Gate can reveal any other symbol except Scatter.

Getting five or more Fire Orbs will set-off three Fire Respins and the totals are calculated at the close of the round. Every time a Fire Orb is revealed, it resets the spin counter to three. There are Mini, Minor, Major and Inferno levels and a full screen, 15x, of Fire Orbs will spark the Inferno bonus.

The risk ladder and card gamble are potentially available for players wishing to maximise the gaming entertainment. Alexandria Fire is available to all Bragg operator partners via Bragg HUB and for social gaming via Whow.