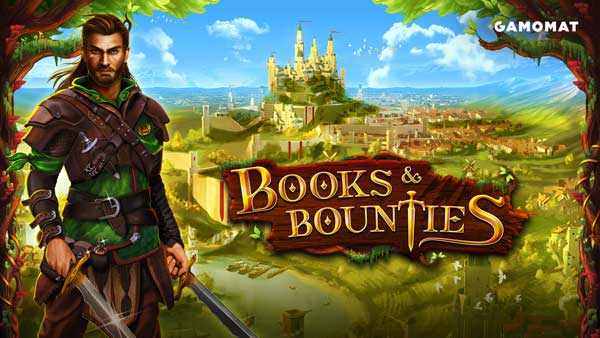 Books & Bounties is the latest chapter of the hugely popular ‘Books &’ series and it invites players into The Kingdom of Milyria for a truly magical journey. Cadoc, one of the land’s bravest and fiercest adventurers, is tasked with heading into battle to take on the mythical monsters on behalf of the King, his country and crown.

Giant lizards, snarling wolves, hydras and winged lions are the leading characters on the reels and there are two types of games which players can immerse themselves in. If three or more ‘Book’ Wilds are discovered then 10 Free Games are awarded, while the ‘Bounty’ triggers 10, 15 or 25 Free Games – depending on whether 3, 4 or 5 are revealed.
Card gamble and risk ladder features are all available to add an extra element to Cadoc’s adventure. This 5×3 game is available to all ORYX operator partners via ORYX HUB. Click here for a video teaser or follow this for a demo of the game.

Dr. Sebastian Reddig, Chief Product Officer of GAMOMAT said: “Books & Bounties takes place within a magical Kingdom that players will adore exploring as they do battle against an array of mythical beasts. There are two Free Games versions to discover and we’re very confident this title will prove a big hit with players.”