iSoftBet launches biggest release of 2020 with Queen of Wonderland Megaways™ 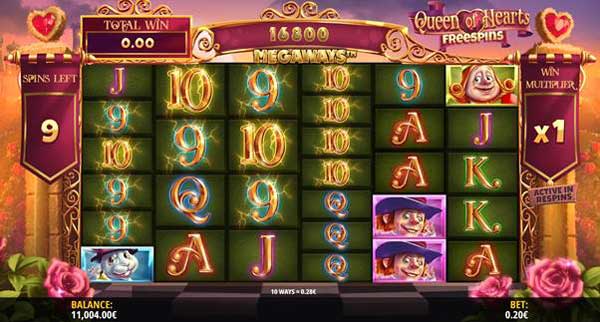 iSoftBet, the award-winning online games supplier and content aggregator, has rolled out the red carpet for Queen of Wonderland Megaways™, its biggest release of the year and its latest addition to its stunning Twisted Tale series where villains take centre stage.

Transporting players to the magical realm of Wonderland, the tyrannical Queen rules the reels in the latest instalment of iSoftBet’s Megaways™ titles, the eighth of the year.

The game was launched with an exclusive invite-only event which saw operators and media partners invited to a virtual tea party in true Wonderland style, hosted by the renowned streamers Fruity Slots and introduced by the Queen herself!

Queen of Wonderland Megaways™ not only contains a lucrative free spins mode, which is triggered after three or more Bonus symbols land on the reels, but also a Hold and Win respins mode – the first game of its kind to combine both top performing mechanics.

Once players access free spins, up to 25 spins are awarded, with every win rewarded with a x1 multiplier. This accelerates with more wins and, due to the cascading nature of Queen of Wonderland Megaways™, can be unlimited, leading to colossal wins!

Cash Respins are triggered if five hearts land on the reels on any one spin, taking players into the classic iSoftBet Hold and Win environment, with the initial count of three respins resetting every time a new heart lands on the reels.

iSoftBet’s Twisted Tale series turns the tables on classic stories with each game placing well-known villains centre stage, with players given the opportunity to take charge of the villain. Queen of Wonderland Megaways™ follows 2020 releases Morgana Megaways™ and Sheriff of Nottingham with a host of Twisted Tale slots scheduled for 2021.

Queen of Wonderland Megaways™ is the newest addition to the supplier’s impressive slots portfolio, which has seen significant growth in both its Hold and Win and Megaways™ offerings this year, as highlighted in recent releases Thunder Shields and Shining King Megaways™.

Mark Claxton, Head of Games at iSoftBet, said: “Journey into the magical world of Wonderland in our newest Twisted Tale hit, Queen of Wonderland Megaways™. With its familiar theme, huge win potential and great design, it’s easy to journey through the looking glass and immerse yourself in our latest title.

“Combining both an unlimited multiplier Megaways™ free spins mode and a Hold and Win bonus feature means players can enjoy the best of both worlds while ensuring that any bonus mode can leave them richer than the Queen herself thanks to the multiplier which can be carried over into the cash respins.”

Johan Ekberg, Group Casino Games Manager at LeoVegas added: “Queen of Wonderland Megaways™ has been one of our most accomplished exclusive launches to date and we are delighted with the outcome. Our partnership with iSoftBet has gone from strength to strength and our customers couldn’t be happier with their adventures into Wonderland.”